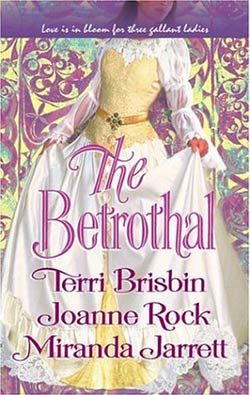 Featuring "The Claiming of Lady Johanna"

Terrified by the rumors and stories about her betrothed’s wicked ways, Joanna runs away before their marriage. Willing to face death rather than the Warlock of Wynwydd, she finds a safe haven in Silloth Keep.

Humiliated by Joanna’s refusal to take their vows, Braden follows her across England and discovers her hiding place. When faced with her fiery resistance, he’s not sure if he wants to woo her or take her by force. And falling in love simply complicates the whole situation!

"THE BETROTHAL is an anthology not to be missed! Three charming stories by three of Harlequin’s most popular authors, THE BETROTHAL offers readers a taste of historical romance at it’s best with compelling heroes and strong heroines set in situations which are often heart wrenching and suspenseful. . . However, I enjoyed all three stories immensely, my favorite being Ms. Brisbin’s contribution. As a fan of her previous work, I was delighted to see another story featuring my favorite characters: Lord Orrick and Lady Margaret. I look forward to reading more from all three of these talented authors!"

"What brings you to this part of England, Lord Braden?" Lord Orrick asked in a quiet voice that managed not to draw the attention of anyone except his wife. The lady missed nothing that happened between them.

"I would speak to you in private, if I may. 'Tis a personal matter," Braden answered as he fought the urge to grit his teeth again.

He hated that he would have to reveal his betrothed's refusal to marry to this stranger. He despised showing weakness, but Joanna's actions necessitated this and many other humiliations to him. Before he could say anything else, Lady Margaret intervened.

"My lord, our guest has still not shaken off the chill of the road. Can this not wait until morn?"

"Of course, my lady." Orrick nodded to his wife first, then to him. "Join me after you break your fast in the morn, Lord Braden." Orrick stood and held out his hand to his wife. "My steward will see to your comfort and to that of your men."

If the haste with which the lord and lady left the hall was unseemly, no one but he took notice of it. Within moments, Orrick and his very fair wife had left the room. Orrick's steward approached him with instructions on the sleeping arrangements and surprised Braden with the offer of a private chamber. Grabbing up a few of the apples, he took them with him as he left the dais to speak to his men.

Remembering the cautious steps of his horse on their approach to the keep, he decided to check in on it at the stables before retiring. His men, assured of food and ale and a challenging dice game, were well-cared for. As he walked through the hall and out into the yard, a pang of wanting, so strong that it took his breath away, struck him. Looking around he knew that this was what he wanted-a well-ordered, successful estate, his people well-fed, and a family to enjoy it with him. Pushing away such sentimental thoughts, Braden focused on his problem.

First he needed to find his betrothed and take her to Wynwydd. Then he needed to show his people that he could keep a wife and gain an heir. The wise-woman of his village had assured him that a spring bride, a woman of black she said, would be fruitful.

At first he'd scoffed at the instructions she'd given him; any thinking, logical man would have. The ceremony should take place outside the walls of his castle, away from any place of death or fear and under a bower of fresh flowers and blossoms and vines. He should plant his seed during the time of the earth's own fertility, in that same bower, and the dew of his wife's release should mix with the morning dew. Gwanwyn promised that his seed would grow and produce the son and the end of the curse that haunted their family for the last five generations.

So, after years of not believing the stories and living in a sort of cowardly refusal to seek a wife and sons, Braden had finally faced the need for an heir. And he did not want to follow in the steps of the other Wynwydds before him-he wanted to live and see his sons. The wise-woman, raised in the ancient Cymric traditions, had been his last hope.

Braden strode down the path that led to the stables and knew, from the quiet that surrounded it, that all grooming and care was done for the night. Seeking the door, he opened it slowly and quietly so as to not disturb the animals inside and let his eyes adjusted to the darkness. His horses stood in the stalls closest to this doorway and he found and quieted his own mount with a few soft whispers and an apple from Orrick's table.

It took but a few moments to check the horse's back leg and determine that there was no injury. As he closed the gate of the stall behind him, the sound soft caught his attention. Turning around and peering down the shadowed line of stalls, he realized it came from the back of the stables. Following the enchanting sound, he walked softly on the packed-dirt so as to not disturb the maker of it. A few yards from the back wall, he found the source.

A lantern burned on low, giving light to a small circle of the stables. Behind the last stall was an area where someone slept. A few blankets tossed in the corner made up a sleeping pallet and the lantern and a cup and an empty bowl sat on a wooden crate. Then the crooning began again and he found the person making it, leaning over a colt that lay unmoving in the nearest stall.

He froze as he recognized the voice. He'd stood behind her at the Mass at court, knowing she was meant for him before she did and wanting no surprises when she was presented to him. Her voice, then raised in the singing of a hymn, was clear and strong and its purity had sent chills in and through him. Those same chills moved through him now as he listened in wonder as she sang softly to the ill horse. Though softer by much, there was no mistaking the voice of his betrothed.

Lady Joanna of Blackburn was here in Silloth.