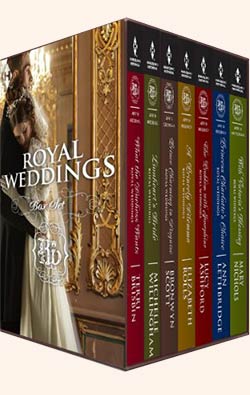 Featuring "What the Duchess Wants"

Follow the stories of seven royal unions and the people that made them happen!

Meet the Prince Williams and Kate Middletons of centuries ago in these seven heart-warming short stories from Harlequin. Combining the romantic dreams of real-life and fictitious couples, each tale has a historical wedding right at its center!

In 1152 the powerful Duchess of Aquitaine, Eleanor, takes a chance on the youthful Henry of Anjou. Later that century, a shipwreck off the coast of Cyprus threatens the union of King Richard the Lionheart and Princess Berengaria. With more than politics on his mind, Prince George goes undercover in 1704 to steal the heart of famous beauty Caroline of Ansbach. In 1795 newly-weds Duke and Duchess of Severn discover the thrills of the marriage bed as the future King of England reluctantly takes his bride. In 1810, an unexpected passion blooms under the nose of the eagle-eyed emperor as the whole of Paris prepares for Napoleon's wedding celebrations. Four hearts leap as the love-match between Princess Charlotte and Prince Leopold sparks another budding romance. And Queen Victoria's maid of honor finds that royal approval might be the solution to her own marital dilemmas!