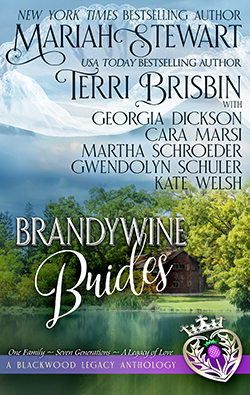 One Family – Seven Generations – A Legacy of Love

Almost three centuries ago, a Scottish convict was sold into indentured servitude in Philadelphia and given a second chance at a life far from the country of his birth. In the years since, the farm secured by Finlan Blackwood’s efforts would grow and thrive in the Brandywine River valley just as his family and descendants did. Today, Blackwood Farm is one of the largest and most successful farms in Chester County. But it took the sacrifices and best efforts of each generation to make it so.

1721 – In A Traitor’s Heart by Terri Brisbin, a convicted traitor from the Jacobite Rising must find a way to rescue a widow from an unscrupulous man’s plans for her. . . and for the lands she holds.

1779 – In A Patriots’ Heart by Gwendolyn Schuler, a wounded British officer hiding a secret puts the daughter of Blackwood Farm’s owner in danger by his presence in their home.

1867 – In A Wounded Heart by Martha Schroeder, a damaged Union soldier arrives home to find his childhood sweetheart is the one trying to save his family’s farm.

1919 – In The Heart’s Song by Georgia Dickson, when the current owner of Blackwood Farm returns from the Great War, everything looks different to him, even the possibility of love.

1943 – In Painted Promises by Kate Welsh, the Blackwood heir, working for the war effort at home, is the only one who can help a woman who fought with the resistance in Europe before she escaped the horrors of war.

1971 – In We’ve Only Just Begun by Cara Marsi, the Blackwood son, suffering from the effects of Vietnam, meets exactly the kind of woman he needs, even if she doesn’t want to be the one.

2017 – In Finn’s Legacy by Mariah Stewart, when a writer comes to Blackwood Farm to interview the family matriarch, the last thing she expects is a reunion with the man who broke her heart before he left for Iraq four years ago.