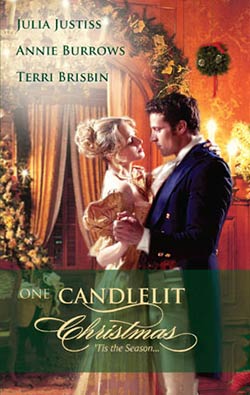 Featuring "Blame it on the Mistletoe"

Julia Fairchild has loved Iain MacLerie since she was just a young girl, trailing him on his family's Highland estate, shadowing his adventures and trying to accept that, due to her age, he could never be hers. Now, she is a young woman who has led a privileged life for the last five years and faces her sister's pressure to marry well. When Iain attends their Christmas festivities, she is shocked to see a bitter, cold man where a vibrant, happy youth once was. But she knows one thing--the love she felt as a child for a young man five years her senior has grown into something much more adult.

Iain MacLerie faced death and came out a different man, injured beyond repair and facing limitations for the rest of his life. Now seeing the lass who used to chase his steps as the exquisite young woman she's grown into is simply another reminder of all he has lost in his life and everything he cannot have. Despite his acceptance that she can never be his, his heart cannot help but hope when events and Christmas mistletoe seem to conspire to get them together.

But can the innocent love Julia offers him transform him back into the man he was before or will it fail to conquer the fear he faces?

Inhaling deeply, he savored the scents that filled the room and created a pleasurable ambiance in the room before sitting down to his work. It was as he walked to the other side of the desk that he noticed it—a scent that did not match the others. Instead of Christmas puddings and trimmings of pine, it reminded him of the fields of summer lavender near his home in the Highlands. Looking around for some sachet left behind by the countess, he found none.

It was then that he spotted it, the secluded sitting area near the windows on the corner of the room, indeed the corner of the house. Masked by the tall bookcases that separated the nook from the rest of the room, Iain noticed that the scent of lavender grew stronger as he approached. When the sound of soft snoring could be heard, he knew he was not alone. Reaching the first bookcase, he leaned around and peeked within.

The soft rays of the morning sun dappled her hair, making it appear to be a multitude of colors—wheat-gold, blonde, and even a touch of the palest of browns. Most of it was caught up in some kind of bun, but soft wisps still curled around her cheeks and framed her face.

Last evening, she had every appearance of a proper English young lady, but this morn, this morn she looked like a country lass fresh from the Highlands. Wrapped in a tartan shawl, with her plain dress, he could imagine her walking the halls of his uncle’s home or in their library though it was not as impressive as this one or running wild in the tall summer grasses of their lands. Julia’s head lay back on the chair, and her mouth opened slightly, relaxed in her sleep.

None of the boyish lass of their childhood could be seen now as he watched her silently from his place. She spoke and shifted in her chair and Iain waited for her to wake. Instead, she settled deeper into the large chair’s cushions and slept on, unaware of his perusal.

Cognizant that his uncle’s arrival was fast approaching, Iain took a step closer to wake her. Before he could, her eyelids fluttered and opened. Her surprise could not be more than his own as she spoke his name in a sleep-deepened voice that sent tremors of awareness through him.

Desire pierced him in a way he’d not expected possible at the sound of his name on her lips. He’d taken several steps forward before the sleep cleared from her eyes and she realized he was standing before her now. He watched as the realization struck her and she sat up, straightening her gown and shawl and placing her once-hidden feet back on the floor.

“Oh, Iain, it is you,” she said softly, becoming the English young lady once more. “I did not hear you come in.”

With a spurt of true devilment, one aimed at trying to replace the hunger and desire that filled him, he leaned closer and whispered to her.

“Miss Fairchild, I fear you snore in your sleep.” She did not attempt to rise from the chair and he did not move back to give her room to do so. He’d left his walking stick on the desk, so he used the arms of the chair for support, bringing him into a closer proximity to Julia as he did. “I could hear it from the other side of his lordship’s library.”

“Surely not,” she whispered, looking around as though checking to discover if only he’d heard it. “A gentleman would not mention something so personal, sir.”

Not certain if that reminder was for him or for herself, he laughed softly. “I mention it only to aid you in your attempts to present yourself as a proper lady, Miss Fairchild.”

His teasing went awry, for a flash of hurt filled her eyes and she gasped. “I am a proper lady, Iain,” she said. Her voice did not carry the conviction of her words though, it trembled even, and he felt the meanest cad for teasing her in a way that obviously caused her pain. But the words revealed more to him than most men here would understand.

“Do not ever let them convince you that you are not as proper and as much a lady as one raised in any of their households, Julia!”

He could not hold back the anger in his voice. He’d faced the jabs and slander of the ignorant aimed at his so-called ‘barbarian’ background, but never thought that it would affect Julia. Her manners, her appearance, even her voice spoke of being gently-born and –raised and not those that polite society seemed to expect from Highlanders, or Scots for that matter. He’d have thought that the earl’s protection would have prevented such hurtful behaviors, but Iain knew the truth—it simply drove them out of sight but did not put a stop to them.

Iain stepped back then, allowing her to stand, but his balance was not good and he shifted, trying to regain his equilibrium. Never a shy flower, Julia reached out and grabbed his waist to keep him from falling to the floor. Clutching the fabric of his coat, she held onto him until he could right himself.

She stood nearly tall enough for the top of her head to fit comfortably under his chin. If he allowed her to stand so. But, as the humiliation of his disability sank in, he wanted to distance himself from her and not allow such weaknesses as afflicted him to show so clearly. Stepping back once more, he found her still gripping his coat and his step back was followed by her step forward, doing nothing to increase the space between them.

“Do not worry, Iain,” she said looking up into his eyes. “I have you now.”

He rested his hands on her shoulders then, not certain who was holding up whom in that moment. His heart pounded in his chest and though he’d like to convince himself it was because of his exertions, he knew better.

All he could think of was her.

But when she lifted her face to him, tilting her head back and positioning her mouth exactly where it needed to be for him to kiss her, he forgot all of it. Iain nearly forgot his place, for the temptation to touch his lips to hers, to taste her and to feel her mouth against his grew so strong so quickly.

He was a disabled man from the wilds of Scotland who would never walk without pain.

She was the young ward of a powerful nobleman, destined to travel the world.

He had no prospects other than those his uncle gave him.

She would marry well and live in the highest levels of society.

He had loved her for years.

She would belong to another.

Even as those thoughts flashed through his mind, even knowing everything that kept them apart, for this moment he wanted to believe she was his and his alone. And that meant kissing her as he’d wanted to since he saw her across the drawing room last evening, with mischief in her eyes and the face of an angel.

Fighting the growing urge within him with the same self-control that had seen him live when given no chance, he closed his eyes and inhaled her scent again. A grave mistake, that. Waves of lavender teased and tormented him and then released him to follow his desire. Tilting his head he captured her lips with his own, feeling the softness beneath his. If it had ended then and there, it would have been enough to last him his whole life, but it did not.

When Julia slid her hands under his coat and around his back, he could not step away. Oh, he could have broken free of her grasp, but damn his fool heart, he did not want to leave her embrace. But it was the sigh, the softest of sounds, that she made that destroyed any hope he had of holding on to his control and allowing her to leave unscathed.