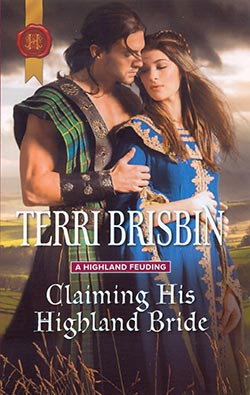 Safe in her Highlander's arms!

After discovering her role in her father's plot to destroy another clan, Sorcha MacMillan risks her life to go into hiding. Her safety relies on her disguise, but she is drawn to a man who could see through her…

Unknown to Sorcha, Alan Cameron has been sent to track her down. He's attracted to the woman in disguise. Even after learning her true identity, he can't overcome his instinct to protect her. No matter the danger, he will keep Sorcha safe…and claim her as his bride!

Alan noticed her first when he entered Brodie’s hall.

She stood near the James and Clara, but not with them. ‘Twas almost as though she was trying to stay out of sight. She nodded if they spoke to her, came closer when they beckoned and then crept ever so slowly back away. She seemed to prefer the shadows over the light.

He strode past her and the others and climbed the steps up to the chieftain’s table. Waiting for Brodie’s nod, he glanced once more over to the corner and noticed she yet remained there.

“You know that is not necessary,” Brodie called out to him. “Come. Sit. Eat.”

“I would not wish to abuse my welcome here,” he said, the sarcasm came easily between him and the mighty Brodie Macintosh.

It was always good to have one of the most powerful men in the Highlands beholden to you twice over. No matter his uncle’s demeanor or behavior, Alan Cameron would be welcome here at Drumlui Keep and anyplace that Brodie controlled. He knew it and mayhap that was why this place felt more like home than Achnacarry or Tor did.

Servants served him from platters and filled his cup with a fine red wine. He nodded to several there in greeting, knowing he would speak with them later. The meal was pleasant, the company moreso, but his gaze kept returning to. . . her.

‘Twas not that she was a spectacular beauty that drew his eye. ‘Twas not that he recognized her, for indeed he did not. So, what did draw him to her?

“I see you have noticed our newest guest there,” his cousin Arabella whispered to him while Brodie’s attention turned elsewhere. At first, he was tempted to deny it. Why bother when his cousin was right?

“Clara’s cousin, recently widowed,” Arabella explained. “Staying with James and Clara and helping her with the bairns.”

As Alan watched, the woman under discussion lifted her head and smiled. Though it was too far for it to be for him, he smiled in return. He could not help himself. He reached for his cup and drank deeply from it, swallowing the rest of the wine down. He could not see the color of her eyes nor hear the tone of her voice, but the need to know both of those things and more about her nearly forced him to his feet. Only the soft chuckle from Arabella brought him under control.

“Other than Clara’s cousin, what do you know about her?” He tried to say the words calmly, hell, he even tried to convince himself it mattered not. The feeling in his gut and the way it was hard to take a breath said otherwise. What the hell was happening here?

“She is called Saraid MacPherson. That is all I know. Clara brought her here to make her known to Brodie and me a few days ago,” she said. “Why do you not speak to her yourself, cousin?” Arabella gave him a puzzling smile before nodding in the direction of the woman. “She is, after all, a widow.”

His body understood what Arabella was saying even if he was tempted to scoff at the remark. A widow had certain freedoms that a married or unmarried woman did not. Good God, what had his expression been to give Arabella the idea that he wanted this woman? But then, Arabella never needed a reason to meddle in his life. For the last several years, she’d taken it upon herself to seek out a possible match for him.

He cleared his throat and turned to face her then.

“There is no need for this, Bella,” he said softly. “I know you wish me well, but there truly is no reason for you to be involved.” Tears glimmered there in her eyes and Alan felt her concern. “Surely you understand that our uncle expects to dictate that choice and not allow me that choice by chance.”

The change in her demeanor was so quick and clear that it even drew Brodie’s attention. He stiffened in his chair and slid his hand over to cover his wife’s where it lay between them on the table. A quick frowning glance at Alan then one filled with concern at Arabella was followed by a tense silence.

“All is well, Brodie,” she said quietly, stroking his hand until he nodded and turned back to the conversation he’d been having before he’d sensed her discomfort. Once more looking at Alan, she nodded. “All will be well, Alan. I think things will work out, somehow, regardless of what Gilbert Cameron wants or how he acts.”

“Brave words, cousin. Especially from someone who knows him as you do.”

They’d both grown up with the current clan chief, though Arabella’s father had occupied the high chair before their uncle. In spite of the difference in their ages and their gender, each had witnessed many examples of Gilbert’s true nature and temper.

“Well, I was not suggesting you marry the widowed Saraid,” she said then. “I thought you might be interested in the company of a young woman.” She let out a breath then and shrugged, sadness and something uncomfortably close to pity entering her pale blue eyes then. “I want you to find the happiness I have, Alan.”

‘Twas not pity there, he realized. Arabella was more like an older sister to him than a cousin. She was having a care for him and it felt strange to him because no one else did. Here they sat, two Camerons amongst the Mackintoshes, welcomed more by this clan than their own.

“Is aught wrong, love?” Brodie leaned over and spoke to his wife. “The two of you have the makings of some tragic story in your expressions.” Brodie’s astute dark gaze met his own then. “Something I should know?”

“Nay, Brodie,” he said, shaking his head. There was nothing about which he could or would speak to The Mackintosh, so he smiled. “Arabella is simply. . . .” He paused, searching for the best word to use, but Brodie beat him to it.

“Meddling? Overstepping? Controlling?” Brodie asked, moving his intent gaze now to his wife who blinked several times at his words. Then, the chieftain lifted his wife’s hand to his lips and kissed the back of it, softening what could have been insulting words. “Bella likes everyone’s lives to be orderly and has a way of trying to make that happen.”

“Never meddle, my love?” Brodie kissed her hand again. “Overstep?” Another kiss, this one on the inside of his wife’s wrist. “Control?” Alan watched, waiting as his cousin clearly did to see where the next kiss would be. Instead, Brodie laughed loudly, drawing the attention of everyone in the hall. “Give over, Bella. You know you do all those things. It is part of you and you could not stop even if you tried.”

Arabella opened her mouth to argue with her husband and found herself being kissed, thoroughly by the looks of it, into silence. Alan sat back, giving them some bit of privacy and looked out at those yet eating and drinking in the hall of The Mackintosh.

With unerring and yet alarming accuracy, his gaze found that of the widow Saraid MacPherson. This time, she was staring back at him. Catching her, he nodded and smiled. Mayhap he should meet the widowed Saraid MacPherson after all?

“If you will excuse me,” Alan said as he rose from his chair. When Brodie waved him off without breaking the kiss he was giving Arabella, Alan considered himself free to leave.

He fought off the growing anticipation within him, now that he’d made the decision to meet the woman. He forced his feet to slow and greeted several people along the way to where she sat. When he realized he was counting the number of tables between him and her, he stopped and turned away. Reaching for an empty cup, he filled it from a pitcher and then drank half of it down in the first swallow.

Bloody hell, but what was happening to him?

He was not some untested, untried youth. He’d experienced first love and lost it and survived. He’d bedded a number of women. And yet, the way his gut threatened to heave, one would think he was a virgin. Alan forced a laugh at someone’s words and tried not to glance over at her.

Three damned tables away, she spoke with Clara.

Standing next to each other, heads together, speaking together, they were a contrast in appearance. Clara stood tall and lush with dark auburn hair and a full smile that she used often and well while the cousin was shorter and dark-haired. As he’d watched, she smiled little and when she did, those seemed shy and tentative. But then one was kin and known to all in the hall and the other was a visitor and a stranger which could account for the reticence in her demeanor.

Somehow, as he’d been watching and comparing the two women, his feet had led him right to them. To her.