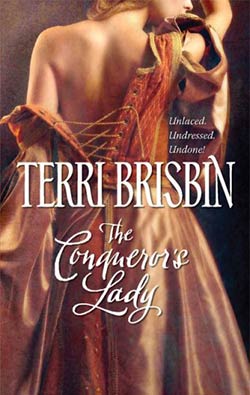 Strong, ruthless, brave and honorable, Giles Fitzhenry is a born warrior who has never been able to shake off the shame of his illegitimate birth.

To save her people and lands, the lady Fayth is forced to marry this powerful Breton knight. She yearns to be rid of her unwelcome husband, although a deep desire stirs each time she looks into his piercing gaze.

Now Giles has conquered all, but the ultimate battle will be for his new lady’s love—and her utter surrender!

The Knights of Brittany
Born to conquer…and seduce!

"Brisbin brews up an expertly crafted medieval romance with a dangerous hero and a smart, stubborn heroine."

The Duke of Normandy surveyed the rolling fields before him and nodded to his commanders. Satisfaction, much like that of a well-fed cat, filled him as he realized that he would now be king of all he could see and more, much, much more. Anticipation surged through his veins and he smiled at the thought of seeing the faces of the Witan now, now that he’d defeated their anointed king and his forces. The clearing of several throats behind him reminded him of the tasks still ahead. The battle for England, though advancing and in his control, was not a thing accomplished yet.

William turned and met the gazes of his commanders who stood a short distance from him and his tent. These men and those who fought in their companies of foot soldiers, mounted knights, and archers waited on his orders. And they waited for the rewards promised for a successful invasion. Already, the vultures of war were flocking to the battlefield, prepared to scavenge amongst the dead and dying.

“It will take days to clear the fields, my lord,” Father Obert, his clerk said.

“They,” William paused and nodded at the growing number of Norman, Breton, Poitevin, French and even Maine nobles approaching his tent, “do not seem to have the will to wait several days, Obert.”

William placed his goblet on the table and held out his hand for the parchment Obert had prepared for his review. A list of crucial English properties and fortifications along with the names of the men who would be the benefactors of his largesse. If he approved. Studying it, he recognized several names immediately, and others that were not the expected ones of his closest advisors or commanders.

“Who recommends such rewards to the nameless warriors here?” William suspected he knew, but before he gifted anyone with lands and titles, he would know the other motives in place.

“As usual, sire, the Bishop oversees that which is vital to your concerns.” Obert did not meet his gaze, but instead bowed his head.

Odo. Half-brother and Bishop of Bayeux. He should have recognized the handiwork of the man in this.

“Ah, he is ever-vigilant on my behalf.” The words, true though tinged with a slight bit of mockery drew a sharp snort from his clerk. Obert missed little in the intrigues that were court life, in Normandy and now here in England. ‘Twas part of his value. “These will anger some who have labored long on my behalf, risking lives and fortunes, only to see the choicest morsels go to others,” he observed.

William took note of three names and knew that even their fathers would object. Those objections, of course, would be couched in the politest terms to avoid mentioning the reason for their anger—they would want such lands to go to themselves or their legitimate offspring and not their bastards. His smile must have been a dangerous one for Obert backed away and waited without saying a word. Certainly not his usual response to such an open invitation to speak his mind.

“You must have some counsel to offer, good brother,” he said, encouraging, nay goading, him into saying the words he now held behind his teeth.

“My lord, the taking of those particular lands is in no way a certainty. They are probably the most dangerous that need to be claimed in your name. Mayhap, some will not even survive. ‘Twould be a pity for some of your most loyal subjects to risk their heirs in such endeavors.”

William rose to his full height, nearly touching the top of his battlefield tent, and nodded. “An interesting perspective, Obert,” he said walking to the flap of the tent and lifting it higher, giving those outside the signal to approach. “And a persuasive argument that will satisfy, at least for the immediate time, some of those who would be most vocal.”

“As you say, my lord,” Obert stepped to his side and they waited for the most noble, the richest and the most powerful of his supporters to enter. “Why waste an heir on such a dangerous task when a perfectly good bastard will do?”

Another man would be dead on the ground for uttering such words to him. Indeed, many had lost much in doing such a thing in the past, but Obert spoke in understood irony as only one bastard to could to another. Their own lives and positions had been based on such decisions. William caught sight of the bodies being piled all over the battlefield and nodded. His men were already calling this place Senlac, the blood lake. And there would be much more blood spilled before he controlled the length and breadth of England.

And it did not matter to him, William, Duke of Normandy, the Bastard, and now the Conqueror. Only success mattered now and, if those on Odo’s list had much to gain and little to lose, so be it. He crossed his arms over his chest and nodded to Obert who began to read out the declarations.

In war, success mattered, blood did not.

“Finish the words and you will be a widow before you are a wife,” Giles Fitzhenry, knighted warrior of William the Conqueror, promised in a harsh whisper.

The blood from the gash above his eye flowed down his face and dripped on the lady’s shoulder, but still he did not relent in his crushing hold. It would take but a moment’s pressure to crush her throat and he swore to himself and then aloud that he would do it if she spoke the words of the vow. Giles turned to face the now quieting crowd in the small chapel and revealed the dagger he aimed at her ribs, another assurance that the lady would die if anyone tried to intervene.

His intended moved with him, gripping his hand as though she could stop him. Lady Fayth of Taerford should have thought about the repercussions of her actions before he arrived. Before his men and hers had been killed in the battle for the keep. . . and for possession of her. Giles nodded to Roger and his man held his sword to the neck of the lady’s comrade in this crime, waiting for her response.

“The keep and lands are mine now, lady, as are you. Your choice of words will simply bring his death more slowly or more swiftly.” Giles watched as the woman in his arms exchanged glances with the man held a few yards away.

He felt her body relent before she spoke the words of surrender. Trying with all his determination to ignore the soft, womanly curves beneath his arm, he lessened his grip a tiny bit and lowered the dagger to give her the opportunity to make the choice. “Do you take him to husband instead of me?” he asked aloud.

“I do not,” she whispered hoarsely into the deathly silence that had covered the room.

With her capitulation, his men surrounded her people and began to force them from the chapel. Without letting go, he nodded at his second-in-command and then at the man who she had chosen as husband. “Kill him.”

The priest protested loudly, but his men ignored the old man and prepared to follow Giles’s orders. It was her quiet voice that stopped him.

“My lord,” she began, trying to face him in spite of his grasp. Her movement simply made his blood drip and smear more over her cloak. It wasn’t until he lessened his grip on her throat that she could speak louder.

“I beg you, my lord. He is not to blame. Truly. Mercy, my lord. Mercy.” She leaned her head back, offering herself as a sacrifice to his anger.

He would tell himself later that it was his need to put an end to the bloodshed that made him relent. He would tell himself that he had never planned to kill the man cajoled or ensorcelled by his betrothed into this foolhardy plan to interfere with his rights to her and the land. But, Giles only knew that at the moment when his gaze met hers, he wanted to grant her whatever she asked of him. He let out his breath and nodded.