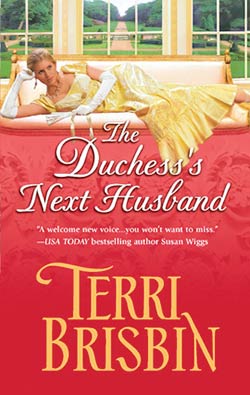 The Duke of Windmere receives word that he’s going to die, and tries to get his affairs in order—which includes finding his wife a new husband!

But as the duke's efforts go awry and he starts to fall in love with the duchess again, dare he hope they will find true happiness together -- before it's too late?

"Historical romance at its best, Brisbin's Regency-era setting is aptly sketched with an economy of detail, her characters are nicely developed, and the enduring conflict between traditional doctors of medicine and the more holistic approaches, as epitomized by midwives and herbalists, is a nice counterpoint to the main plot."

"Brisbin offers a novel of manners with high sexual tension and just the right Regency flavor, plus a satisfying and romantic ending."

"As most Regency readers know, the normal ton marriage during the era was often for a couple to live separate lives, and THE DUCHESS’S NEXT HUSBAND is one of the few tales that I’ve read where this is actually the case between the hero and heroine. Seldom have I read about a couple like Adrian and Miranda, and I found the details of their life intriguing. Adrian and Miranda are both wonderfully drawn, realistic characters, and they are impossible not to like.

"Ms. Brisbin has penned a very sweet read. . . Adrian and Miranda were compelling characters. The fact that these two were already married at the beginning of the story made the storyline a little more unique. The concept of facing your own mortality is a very interesting vehicle for a storyline and Ms. Brisbin has made the most of it. I truly felt invested with the characters and the change in their relationship was sweet and tender to read. I highly recommend Ms. Brisbin if you are in the market for a fast-paced read that will touch on your emotions."

"THE DUCHESS'S NEXT HUSBAND is original with well developed characters I came to really care about. Adrian and Miranda are well grounded in their world, the secondary characters Sophy and Adrian's friend Parker are delightful and I loved Sophy's down to earth sexuality with her husband Lord Allendale. This is one 'Lady" who truly enjoys 'the baser pleasures'. . . THE DUCHESS'S NEXT HUSBAND is just a delight from beginning to end. Brisbin proves that in the hands of a skilled author even some of romance's clichéd plot points can become fresh and vital. With her last 4 books for Harlequin, Brisbin has become an author one can count on for a wonderful tale of love filled with likeable people in difficult situations--which makes her an 'autobuy' for me."

"THE DUCHESS'S NEXT HUSBAND is another triumph for one of today's most dynamic authors of historical fiction! Ms. Brisbin's engaging brand of storytelling will hook readers from the first page and keep her audience captivated until the very end. Adrian and Miranda's story is rather unique in that they are a married couple who, because of societal demands, have grown apart but learn that the love they once shared early in their marriage is still possible. Must it be that the issue of Adrian's mortality has revived this passionate romance? Yes, but any melancholy this reader felt for the characters early in the story quickly dissipated.

I have always greatly enjoyed Ms. Brisbin's medieval romances and while the Regency period is not my personal favorite, THE DUCHESS'S NEXT HUSBAND is a story not to be missed by any fan of historical romance! Highly recommended. "

"None of this is my concern, is it Windmere? I should be ignorant of your business dealings, your personal relationships, all of it. So, why do you speak of it now?" So bothered by all he had shared and yet not, she walked to the cabinet and filled her own glass. "I thought our life had fallen back into its regular pattern since we returned from the Park. Why bother speaking to me about any of this?" She drank down the contents of her glass and poured more in.

"I think that you sensed something was different and that you reacted to those changes. Whatever the alteration was between us, I believe it caused me to take certain liberties with you that I would not have otherwise have taken."

"Are you apologizing again?" Miranda walked over to him and shook her head. "Have we been separate for so long that you do not remember our time together, Adrian? Certainly, your approach during that night and morning was more ardent than your usual one, but is that what you are apologizing for?"

"Miranda, a lady, a duchess, should not be exposed to that type of behavior."

She could feel the scream trying to get out from deep inside her. It was filled with anger and terrible words and she knew she could not let it free. Her misbehaviors had been pointed out to her and she knew he was not offering her a different way of things between them. He was apologizing for making it different those two times.

"I see," she admitted. "So if those times were the aberrations, then you wish to return to our normal schedule?"

"The priority of this marriage remains producing an heir, Miranda, as it always has been."

The words, although she'd been raised and groomed to understand and accept them and even though she knew the real purpose of noble marriages was about dynastic succession, stung her. Nodding, she swallowed half the brandy in her glass in one mouthful.

"It is as much for your protection as the family and ducal future. I know that sounds harsh, but it is true." He stopped then and drank as though he'd said too much.

Her protection? What did that mean? Her head began swimming from too much brandy in too little time and she could not focus her thoughts. Rubbing her eyes, she shook her head.

"It is my fault, Windmere. I am not the appropriate wife for a man of your status. I know that, I have known it for some time. You see, for all your mother's strictures and rules and demands for appropriate behavior, she saw it at once, but it was too late to change it. And, of course, my failure to produce the necessary heir efficiently does nothing to raise my esteem in her eyes."

"Miranda? I think you had too much brandy. . ." He tried to take the glass from her, but she moved her hand so he could not. Then she drank the rest down.

"If you are being so candid and speaking of such personal things, I can only offer you the same honesty," she brushed her hair back from her face and leaned in closer. "Then we must never speak of it again for such things should never be shared between husband and wife," she said, placing her finger over his lips. "Wait," she said, stumbling over to the decanter, pouring another serving in her glass and turning back to him. "I do not find it as easy as you to be so blunt. . . "

Miranda knew she was getting drunk, but she simply could not stop herself. It was probably because she was overtired and had had little to eat that day. It was probably also due to the warm and fuzzy feeling it gave her as she tried to face the harsh truth between her husband and herself.

"Miranda! Here now, let me take that," Adrian was suddenly at her side reaching again for her glass. "I think you've had quite enough." How had he moved that quickly? She blinked and the snifter was gone from her grasp and he was back in his seat.

She walked to her chair and tried to sit in it, but it kept moving. Finally, Adrian took pity on her and pulled her down to it. Well, it was time to be honest with him. Of course, this would not bother him as the information about his mistress had bothered her. He may even be pleased about most of it, for surely it would give him what he wanted most-a decorous wife, who behaved appropriately and at the same time did her best to secure an heir to his dukedom.

"I am willing to be your less-than-acceptable wife, one of lower birth who you got stuck with by marrying before you knew about your title." His faced turned white but she continued. "I am willing to live in this marriage with nothing more from you than your polite regard and the living you provide to me." She paused because now he was standing up in front of her and she needed to crane her neck back to see him. "I am even willing to let go of my dreams of having a husband who loves me and wants me, as my father and mother did."

Oh, sweet Jesus! Had she really just said that to him? She clapped her hands over her mouth, but it was too late. Miranda leaned back to see the expression in his eyes, but fell back against the chair instead with her dressing gown tangling around her legs. He wrapped his hands around her arms and pulled her to her feet.

"What do you mean, Miranda? You do not mind the liberties I took? You would welcome them?"

He lifted her chin and she thought she saw mirth glittering in his hazel-colored eyes. How could a woman not enjoy being naked with a man like this? How could all the wonderful feelings that he could cause with his mouth and his hands and his. . .body not be something to anticipate? How could she ever lie unmoving again in his embrace as he filled her and made her scream?

Without stopping to wonder if she should or not, Miranda reached up and slid her fingers through his hair, smoothing it into the style he usually wore. Its silky texture tickled her fingers and she wondered what it would feel like on her skin. Pulling his head down, she kissed him, tasting the brandy on his tongue and letting him taste her. Lucky for her, he still held onto her because now, when she opened her eyes, the room spun around her. Out of breath, she nodded to him in answer to the question that still circled inside her thoughts.

"I would welcome them, Adrian. I would."

He kissed her this time and she grabbed onto the lapels of his evening coat to keep her balance. Well, at least she tried to. Now, her head seemed to move in one direction, her eyes could not focus on anything, her legs began to tremble and her stomach began to spin inside her. Leaning back from Adrian, she shook her head.

"But this is not a good time for them."

Before she could warn him away, it happened. A moment later the Duchess of Windmere cast up her accounts, on the duke, proving that too much of even a very good brandy was not a good thing.