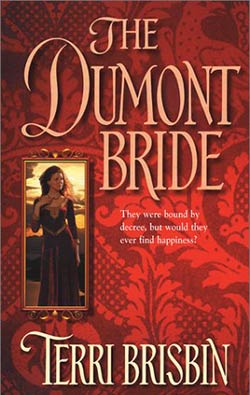 Christian Dumont Had Been To Hell To Pay For The Sins of His Father. . .

Now a royal command to wed would restore all he had lost--but at what price? For though marriage to landed, beauteous Emalie Montgomerie seemed to present no hardship, his countess harbored a secret dangerous enough to destroy them both!

Though she held her honor unblemished in her heart, Emalie Montgomerie knew that coming unchaste to her bridal bed was a sin unforgiveable in a noblewoman. Still, the desire flaring in Christian’s eyes offered her hope. . .but would the prideful Dumont ever accept another man’s babe as his own?

"The Dumont Bride is rich in its medieval setting without shortchanging the romance between Christian and Emalie. Their trials could take place in any century, but the honor and chivalry is true to the time period. Christian Dumont is a hero of the finest sort, and Emalie a woman to be admired. Terri Brisbin has written an excellent tale that will keep you warm on a winter's night."

"Beautifully written and well researched, this book is a perfect ten in many ways. Appealing, realistic characters whose lives intertwine with historical figures, as well as a solid cadre of secondary characters, make this novel especially convincing. Ms. Brisbin brings the past alive with her unique plot. THE DUMONT BRIDE is a book that anyone who enjoys a wonderful historical romance will love."

"A masterpiece story that exemplifies historical romance at its finest, THE DUMONT BRIDE receives a Perfect 10 from Historical Romance Writers. This story was riveting from start to finish. It defied conventional storylines and continued to surprise each step away. Traditional resolutions that were expected did not come. Ms. Brisbin weaves a tale of love, passion, acceptance, and political intrigue that is sure to become a classic. Bravo, Ms. Brisbin!"

"Another heartwarming tale from a superb storyteller! Once again Ms Brisbin gives us characters to love and yes even heroes we'd love to throttle once or twice. Another book to add to my keeper shelf."

"Terri Brisbin does a nice job developing the personalities of the hero and heroine. . . Readers will be intrigued from the beginning."

Eleanor Plantagenet, Queen of England, by the Wrath of God, watched as pride and anger stiffened the spine of her young ward. Although she wanted to scream out her own anger and cry tears of sorrow for the way she suspected that this child had been ill-used, she did not have the luxury of either. Only action on her part would save the kingdom and possibly save this girl's life as well. Since it was her son's actions that had caused this damage and since it would be that same son who would continue his pursuit until his desires were satisfied, only she could step in and circumvent his plans.

"So, Emalie," she said, "I will ask you only once more. Give me the name of the man who has dishonored you."

"I know not of what you speak, Your Grace." The girl would not meet her gaze.

"I am not a fool and do not expect to be treated as one by you!" Eleanor snapped, trying to break Emalie's calm demeanor to get to the truth. Other than a slight trembling of her clasped hands, there was no change in her expression or in her willingness to answer.

As Eleanor walked closer to the girl and prepared to ask another question, a commotion began outside the door of the solar. Rising voices and scuffling feet soon gave way to the door being thrown open as her private bodyguards made a valiant attempt to keep her son from the room. At her signal, their efforts ceased and the soldiers instead took up places on either side of the open door.

"Madame," John said, with a arrogant nod of his head as he sauntered to where she stood. "You are looking well this fine day." John tilted down and touched a cool kiss to her cheek. She fought the urge to shiver at the dangerous slippery tone of his voice and look in his eyes. 'Twas at times like these she wondered how she had ever birthed and raised a viper like this.

"I gave orders not to be disturbed. Those orders were intended to give us some measure of privacy for our discussion." She rose to her full height and faced him with her truth. "Those orders were to keep you out until I bade you enter."

"Ah," he said, reaching out to Emalie and grasping her hand. "The ever-fair Lady Emalie Montgomerie. . ." John leaned over and pressed his lips to the girl's knuckles. He purposely allowed her a glimpse of his tongue touching the top of Emalie's hand. Not quite as practiced at ignoring her son's vile habits as she herself was, Emalie recoiled from his grasp and tucked her hands tightly at her side. The girl turned an even paler shade of white as John smiled his oily, toothy smile--one that did nothing to hide his intentions. "With one so lovely awaiting me within, not even two full companies of your bodyguards could keep me from this room, Mother."

Eleanor wondered if the girl knew she was moving herself ever so slightly in Eleanor's direction, as if claiming protection from John. John clearly noticed, for he stepped quickly into Emalie's path.

"John! Enough of this. Stop toying with the girl and tell me your reasons for interrupting my discussions." Eleanor made her way over to one of the two tall straight-backed chairs near the windows. With a wave of her hand, she directed Emalie to the other one and watched in sympathy as the girl sank into it. She was clearly an amateur in the ways of dark, conniving men.

"I am here on behalf of my friend, William de Severin," John began. He, too, walked to the window and looked out it, affecting his favorite disinterested expression. Nothing good could come from this situation. Nothing.

"And what has that man to do with Lady Emalie?"

"He has come to regret his overzealous behavior toward you, dearest Emalie," he said, glancing first at her and then turning his attention away from her and toward his true target, "and wishes to come forward and save you from disgrace."

"Your Grace, I am not in need of being saved from any dishonor," Emalie answered in a soft voice.

"Nonsense, Lady, all in the castle and village know of what I speak."

Eleanor did not let this go any further--she must take control before all was lost.

"I, too, have found no reason for Lord William to save Emalie," she boldly claimed.

"Mother, as I told you in my message that summoned you here, William has confessed to carnal knowledge of the Countess and is now willing to marry her to prevent her dishonor."

"And I repeat, I have found no reason for that marriage to go forth."

"The lady's servants have sworn on their immortal souls that she is an innocent."

"You, John? Had you something to do with trying to dishonor the Countess of Harbridge? 'Tis bolder a move than I thought possible for even you. And brave considering the love and esteem that your brother had for her father before his untimely passing." Eleanor met her son's gaze and read the truth there. Emalie had been his goal, William his puppet, and the girl's disgrace the tool to bring her into his power.

She took a moment and looked over at Emalie. The girl's shallow breaths and pasty complexion told her Emalie was nigh to fainting. And Eleanor's stomach churned at the realization of John's intentions.

"I have spoken to every person in this place whose name you presented to me and not one, not a single one, has said anything but the most glowing of words about their mistress. Not her personal servants nor the whores in the village. To a person they have denied your allegations, leaving me no choice but to refuse William permission to seek her hand in marriage."

"Madame, I think you should consider this carefully." John said softly, his voice more menacing than when he lost control and shouted his anger to the world.

"Richard is King once more and he will not permit this undisguised grab for control. Now, I think that you and yours should turn your ravenous gazes elsewhere for we are done here."

With an angry wave of her hand, Eleanor called to her guards. "Escort the Lady to her chamber and let no one delay you." Eleanor nodded to Emalie to follow the guards. The girl stood and made a wobbly curtsy before turning to leave. Then stiffening her back once more, Emalie left the chamber as the Countess of Harbridge and not the terrified girl of a few moments before.

John watched with obvious lust as Emalie walked past him and out of the solar. This was not over yet. And, as if to confirm her own worst fears, he voiced it for her.

"Pleased or not, I am here at your request. And I will stay until I am sure of Emalie's safety."

"Or until something requires your attention elsewhere." John walked to her side and leaned close once more to kiss her cheek. He did not step away but whispered his warning in her ear instead. "Take your concerns back to Richard and leave England to me, old woman."

Eleanor sat completely still until the viper had left the room and the guards had closed the door behind them. And then, for the first time in a very long time, Eleanor, Queen by the Wrath of God, of England, allowed every one of her seventy-two years to press down momentarily on her shoulders. And that great weight took her breath away as she sought a way out of this dilemma.