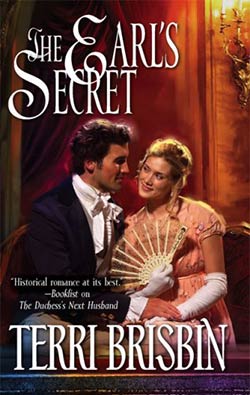 A war of words over the issues of the day in Regency Edinburgh forces David Lansdale, the Earl of Treybourne to hide his identity and seek out his anonymous opponent. But the enchanting woman he meets harbors her own secrets.

Anna Fairchild has too many depending on her to let an attractive man turn her head and her heart. This stranger from London ignites all sorts of yearnings in the woman who swore off men and marriage years ago. David undermines her defenses and steals her heart and she fears that no words can ever make things go back to the way they were.

When all the secrets are revealed, who will win this battle for love?

"Brisbin gives a nice overview of Edinburgh, along with the various Whig and Tory political publications, in this charming, sensitive and nicely written romance. Secrets, an independent bluestocking and an English lord who believes he’s not worthy all come together in this satisfying novel."

"THE EARL'S SECRET is a delightful Regency romance with engaging characters and an amusing story. . THE EARL'S SECRET reads like a comedy of errors at times, with concealed identities, erroneous assumptions, and grave misunderstandings. . . A very satisfying romance develops between David and Anna that is both believable and heartwarming. . . The author successfully brings nineteenth century Edinburgh to life with its politics and social customs. Anna and David are very concerned with social reform, so while they face personal conflicts, they are dealing with serious matters, too.

David and Anna may be in the dark when it comes to each other's secrets, but the reader is not. And there's nothing like knowing somebody's secrets to help become acquainted with that person. Being privy to the hero's and heroine's deepest thoughts and confidences make them real people for the reader. We learn their fears and desires and either sympathize or relate to these two charming characters. They are both flawed but noble and likeable. I highly recommend THE EARL'S SECRET. With the romance and intrigues going on, there is plenty of entertainment. These elements combined with the fine characterization, make THE EARL'S SECRET a memorable tale that satisfies on many levels."

Engrossed in her review of the newest textbook she’d chosen to use to teach reading at the school, the knock surprised her. Before Anna could call out, the door of Nathaniel’s office opened and a stranger entered. She did not see his face as he turned momentarily to close the door, but his fine clothing spoke of money and his bearing of power. The expression he wore was as surprised as hers must be at finding an unexpected person in place of the one they sought. She pulled some papers over the book and then rose and walked around Nathaniel’s desk to meet him.

“Good morning, sir,” she said, holding out her hand to him. “May I help you with something?” He eyed her extended hand and frowned. Ah, a high-stickler. Most likely from London.

“Good morning. I am seeking Mr. Hobbs-Smith,” he said with a cursory bow, but without taking her hand. His accent confirmed his origins.

“Mr. Hobbs-Smith has not arrived yet. I am Miss Fairchild. Can I be of service?”

Anna observed him as he thought on her words. Tall, taller even than Nathaniel, this stranger carried an air of anger and danger as he shook his head. When his gaze met hers, the piercing blue stare rendered her breathless. She’d never felt such a concentration of attention before and her words jumbled in her mouth, unable to right themselves. Finally, Lesher opened the door and whispered of Nathaniel’s impending arrival, breaking the spell being woven that robbed her of her wits.

“Can I offer you some refreshments? Mr. . . .?” Anna waited for some name to attach to this man. She needed to know his identity.

“This is a business matter, Miss Fairchild. No refreshments are needed.” He tugged off his gloves, crushed them impatiently in his grasp and examined every inch of the office. Lifting the hat from his head, he tossed the gloves inside it and laid it on the desk.

Did he think her an imbecile to not know the expectations at a business discussion? She was simply trying to be polite and he was treating her as though she was a . . . woman.

Anna detested the imperious attitude of those of his class, which she supposed must be noble. The only working women he encountered were most likely his servants or store clerks or those who earned their money on their backs.

She gasped as her thoughts went in an inappropriate and unexpected direction. What had ever conjured up such things?

“Are you in distress, Miss Fairchild?” he asked. His gaze did not soften, but there was something resembling concern in it now.

“I am well, sir. I only just remembered a previous commitment.” She hoped the blush was not so apparent to him as she went back to the desk, rearranged some of the papers there and picked up her book. “Mr. Hobbs-Smith is soon to arrive. If you will excuse me. . . .”

Anna’s escape was in sight, her hand on the knob of the door, when it opened and revealed Nathaniel standing there. She pulled it back and allowed Nathaniel to enter.

“Nathan. . . Mr. Hobbs-Smith, you have a visitor,” she announced to warn him of the presence behind her.

“So, I was told,” he replied, tilting his head towards those in the outer office who stared and waited, not even bothering to hide their curiosity.

Nathaniel walked past her and she shut the door. Now, her own interest forced her to stay and discover the intent of the mysterious stranger. When she turned back, she found Nathaniel, with his mouth hanging open and his eyes wide, simply staring at the man as though he’d seen the very specter of death.

“Mr. Hobbs-Smith,” the visitor exclaimed as he reached for Nathaniel’s hand. “And I was not certain you would remember me from our previous acquaintance.”

Nathaniel did not refuse, exactly, but offered no enthusiasm or resistance to his greeting. Watching the man closely now, Anna was certain she glimpsed some devilish enjoyment in his gaze at Nathaniel’s obvious discomfort.

A gentleman only? Not a nobleman? Glancing at him, she noticed the expensive material and fine cut of his coat and boots, the well-groomed appearance and haughty bearing. Surprised at her misjudgment, Anna waited to learn more.

“My memory failed me, sir. Forgive me,” Nathaniel said. Realizing that she was still in the room, he turned and began to introduce her. “And this is. . . .”

“Miss Anna Fairchild,” Mr. Archer said. “We have met already. Since Miss Fairchild has another commitment, I would suggest we allow her to leave.”

The dismissal, bordering on curt, was however accomplished very smoothly. Now that her escape was assured, Anna realized she did not wish to leave. Something was amiss here, for there was a strong and palpable ambient between this man and Nathaniel, and she wanted to know the truth of it. When Nathaniel did not voice an objection to her departure, she knew she would not be able to stay.

She would simply need to discover more about this man and this business he pursued when she dined with Nathaniel and Clarinda this evening. With his sister as her ally, Nathaniel would stand no chance of keeping secrets.

Mr. Archer’s disconcerting way of gazing at her, as though he could see and hear all her thoughts, convinced her of the wisdom in a strategic retreat. Glancing from one to the other, she noticed for the first time that they were opposites in many ways in appearance.

Nathaniel was tall and thin, with sea-green eyes and blond curls that made many a woman swoon. She knew because she had witnessed it many times—his angelic good looks and pleasing manners nearly defeated her own efforts to stay out of the bonds of marriage.

Mr. Archer would make women swoon, but she suspected that it would be in fear or from intimidation, for Anna could feel the effects of his intense blue gaze and muscular build on her own calm senses. Although his clothing was the height of fashion and design, he wore his light brown hair cut shorter than was the current rage. Somehow, though, it fit him, for attempts to soften his appearance with longer hair or the curling style that Nathaniel sported would have met with failure.

Intrigued more than she would like to admit, Anna knew she must depart. “I will return at one, Mr. Hobbs-Smith.”

Anna closed the door and stood there waiting, impolite as such behavior was, to hear anything spoken between the two men. She wanted some clue as to their past acquaintance, as Mr. Archer referred to it, or to their business. When silence was the only answer, she glanced at the textbook in her hands and knew she would have to wait.

As she made her way to the school, she hoped and prayed that Nathaniel was not so jostled by whatever this man’s arrival that he revealed too much to him. Nathaniel tended to become unnerved under too much pressure. They must stick to the story they’d concocted to cover the truth.

Too much and too many depended on it.