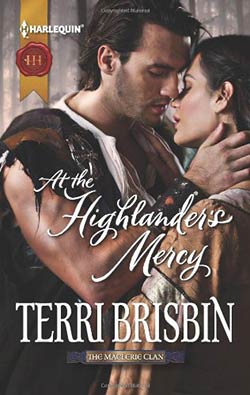 CAPTIVE OF THE CLAN

To regain control of his fractured clan Robert Matheson must take Lilidh MacLerie hostage as a bargaining tool. But Lilidh is no ordinary captive. She’s the woman he once loved—and rejected!

Rob’s touch is etched permanently into her memory and, unaware that he was forced to repudiate their love, Lilidh has never forgotten the man who broke her heart all those years ago. Now, looking into the eyes of her captor, she no longer recognizes this fearsome leader. She should be afraid—there’s no telling what he will do. But something about him excites and unnerves her in equal measure....

“With a true appreciation of the Highlands, history and clansmen, Brisbin brings readers back to the wilds in a captive/captor romance which will delight Scottish romance fans who enjoy good repartee and a quick pace. Pleasant with few surprises and a classic plot, the well-crafted love story is what Brisbin does best.”

“I care not for your words, Symon,” Rob said, stepping down and forcing Symon to move back. He did. “I am chief and will make decisions for this clan.”
Crossing his arms over his chest, he watched Symon’s expression as all those loyal to him lined up behind Rob. All the elders save Murtagh gathered with him, but Murtagh’s move was not a surprise to Rob. The old man had supported Symon’s claim throughout the time of uncertainty and did not yield now.

“You refuse to take action against the MacLeries, though we want it,” Symon said. Rob’s gut seized, warning of something bad coming. The next words confirmed it. “Lachlan, come,” he called.

Symon motioned with his hand and his men separated. One of the men strode forward from the back of the hall while Symon’s gaze never left his. Lachlan carried a bundle over his shoulder and Rob could not guess what it contained. Then, he saw the bundle move, much as a body would if carried in that manner, and he drew a breath through his clenched teeth.

“Symon,” he whispered. “What have you done?”

He turned from the self-satisfied smirk of his cousin and towards the man and the bundle. Taking no care, Lachlan dropped it on the rush-covered floor just in front of them and stepped back. This was not going to end well, for neither him nor the person they’d kidnapped.

“You have orchestrated this. Carry on, Symon, and let us see who lies within,” he said. Better to see what challenge he faced then drag this out, he thought.

Symon, not a small man though not as large as Lachlan, walked to the bundle, untied the ropes encircling it and tugged an end free. With a grip on that and one good flick, the bundle unrolled and unrolled until a woman was freed and left lying at their feet.

“What the hell did you do, Symon?” he yelled as he bent over the woman. Tugging the sack off her head and then removing the gag he found there, he summoned one of the women over to see to her as he stood and dragged Symon aside. “Who is this and why did you kidnapping her?”

“We did not kidnap her, Rob. She is a prisoner of war,” he said.

“We are not at war,” Rob said as one possibility began to tease his thoughts. Even Symon would not be so bold and brash as to. . . .Nay! It could not be. . . . Was it truly Lilidh MacLerie?

Rob turned back to look at the woman who lay unconscious on his floor. The servant had pushed her hair from her face and was dabbing at her dirt-covered face with a wet cloth. He took in the costliness of her clothing and the jeweled rings on her hand, not missing the gold band on her hand that spoke of her married state.

Then he noticed the gently-arching brows, the curve of her neck and the full lips that had enticed him even in his youth and yet haunted his dreams and knew it was her.

“You kidnapped the MacLerie’s daughter? She is wed to Iain MacGregor.”

He swore under his breath now as the implications hit him. This was an act of war against two powerful clans. Worse, this was not simply taking their cattle or burning a few farms, which would insult enough. This was a personal attack as well on both clans and their chiefs. Holy Christ, what had Symon gotten them into now?

“Dougal, check the guards. Brodie,” he called to the steward, “Get the outlying families into the village and gather the stores.”

He pushed Symon aside and walked over to take a closer look at Lilidh. As he could have predicted, she’d fought against them when they took her—the bruises on her face and her torn fingernails showed that much. The markings of a man’s fingers on her neck made his own clench in response. What else had they done to her?

“How did you find her?” he asked, as he strode towards Symon. Nothing, nothing would give him greater pleasure now then pounding his face into the floor and breaking a few of his bones. Grabbing Symon by the neck, he forced him back several steps until his back met the wall behind him. “Where are the others?”

Symon’s gaze moved to something or someone over Rob’s shoulder and Rob knew Lachlan approached. With a nod of his head, his men took care of that threat. “Where are they?” he asked again, squeezing hard until Symon choked for breath.

“She was returning to Lairig Dubh. We took her on the road just after the river as she left the MacGregor’s lands,” he forced out.

“And her guards? Her servants?” No daughter of the MacLerie and wife of the MacGregor would travel alone.

“A few of the guards are dead. We left the rest of them and took their horses.”

“Did they see you?” he asked, but he knew the answer. They made sure they could be identified as Mathesons. Symon wanted the MacLeries and MacGregors to know who’d taken Lilidh. They wanted to force his hand into war.

He tossed Symon to the ground and turned back to the servant at Lilidh’s side. “Find a chamber for her.”

“She is my prisoner, Rob. I want her held in the aerie.”

“You think she is that dangerous?” he asked, pointing to the unconscious woman on the floor.

The aerie was in one of the oldest parts of the keep and sat open to the winds. Lightning had struck the roof and blown it away and no one had ever repaired it. Though mostly unused, it had been used as a cell for prisoners in the past. . . the far, far past. Rob turned back to argue with Symon and to assert his control over any prisoner of the clan when she moved.

Within a few moments, she’d seized a dagger from one of his men and held the servant woman hostage. The wild expression in her eyes spoke of her confusion but warned him of her uncertain behavior. Spreading his hands out to show he was unarmed, he began to walk towards her slowly and evenly.

His words might have worked until Symon began jeering at her and his men added their taunts. Overwhelmed and injured, she glanced left and right, estimating her escape routes he was sure. She dragged Edith with her, using her as a shield as she moved. When Lilidh blinked several times and stumbled, Rob suspected a head injury. He tried to follow her moves, staying the same distance from her and speaking quietly to her, but his voice was drowned out by Symon’s men.

“Silence!” he yelled trying to regain control over a dangerous situation.

Well, he did manage to get the men under control but it gave Lilidh the moment she was watching and waiting for and she pushed Edith at him and ran for the door. He passed Edith off once she regained her balance and ran to catch up with her. . . before she got to the door or before Symon reached her. Symon was faster and he got between her and the door, forcing her to stop. He wondered how she could move so quickly on her leg.

“Come now,” Symon urged her towards him. “Do you want to try me again?” he goaded.

Rob swore he would kill Symon for this, but first he must stop Lilidh before she was seriously hurt. He doubted that Lilidh knew where she was or even who he was. No glimmer of recognition filled her eyes when their gazes met, but years had passed since she’d seen him last and he’d done the usual growing up that young men did. No matter the manner of their parting, he would never forget what she looked like. Turning his attentions back to her, he decided that he would need to gain her trust.

“Lilidh MacLerie,” he called out to her. “Do you remember me?” he asked while waving Symon off. When his men positioned themselves to intervene, Symon finally backed off, though the expression in his eyes promised it was not the end of his challenge to Rob’s leadership. “Lilidh?”

Her hand, holding the dagger out before her, began to shake badly and she lost her balance once more. Just when he thought she would tumble to the floor, she righted herself and pushed her hair out of her eyes and tried to focus on him.

“Who are you? Why have you done this?” she said as she looked from one man to another and to the next. “Does my father know about this?” Rob waited for her to bring her gaze back to him and then he smiled at her.

A silent moment passed and then another and another before the light of recognition flared in her forest green eyes. Then she shook her head, though whether in disbelief or confusion he knew not. Lilidh opened her mouth several times but no words escaped. The distraction is all he needed to gain control of her without hurting her more so he crossed the empty space between them in a few paces, grabbed her wrist and squeezed until she dropped the dagger. Kicking it aside, he still held onto her. As she probably had when Symon took her, she did not allow his hold to remain there. She began backing away, pulling and tugging, trying to free herself.

Lilidh just did not realize she had no chance of escape. As Dougal and some others returned to the hall, he gave one sharp tug and pulled her close, wrapping his arms around her from behind. Rob noticed the smell of blood and saw the thick patch of it on her head—she had been struck and knocked unconscious. Tightening his hold on her, he leaned down and whispered in her ear so that only she could hear his words.

“Lilidh, you are safe with me. No one will hurt you.”

All the times he’d dreamt of next holding her in his arms he has never seen it happening this way. But his body reacted, regardless of how and why, as he felt the womanly curves resting under his arms. Once she realized who he was, any chance of holding her like this would disappear forever. She belonged to another man and could never be his. She was the daughter of a powerful earl and he was a bastard pretending to be laird.

It would never be, so why not make that clear from this moment on? Taking in a breath, he spoke the words that would separate them forever. . . again.