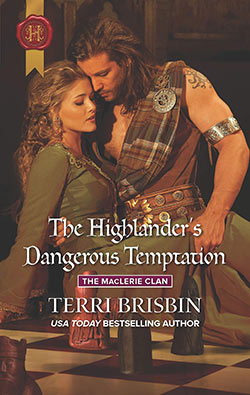 SHE IS SIN PERSONIFIED…

Cursed by past tragedies, notorious Highlander Laird Athdar MacCallum has devoted himself to leading his people—and has vowed never to marry again. Until he is utterly disarmed by the innocent beauty in the eyes of Isobel Ruriksdottir…

Isobel is drawn to the vulnerability she senses behind the fearsome facade of the clan chief. But with his formidable reputation, he is strictly forbidden. Being together can only lead them into danger, yet the temptation to risk all for their perilous passion is impossible to ignore.

“With a true appreciation of the Highlands, history and clansmen, Brisbin brings readers back to the wilds in a captive/captor romance which will delight Scottish romance fans who enjoy good repartee and a quick pace. Pleasant with few surprises and a classic plot, the well-crafted love story is what Brisbin does best.”

Athdar swore under his breath as he walked ahead of the two young women into the dark-stone keep to find his brother-by-marriage. He had to meet with Connor and several of his advisors over changes to their plans. As he nodded to those he knew, he cursed himself for his stupidity. Smiling and winking at Isobel? Truly, he was wanting in the head to do such a thing in front of others.
Nay, to do such a thing at all.

Isobel was Rurik’s daughter and if Rurik learned of any attention paid by him to her the man would have his head. . . or nether parts! He’d already faced death at Rurik’s hands once before and he never intended to do that again, not even for the lovely Isobel.

Damn his eyes, but she was a beauty! He’d watched as she’d grown from gangly girl to this stunning young woman of confidence and intelligence. Her parents had seen her educated as most of those in the MacLerie’s immediate families were. And like many of the other girls and women, they had been encouraged to know and speak their minds. Most unusual, he knew, but here in his brother-by-marriage’s keep and village, it all seemed the norm.

He sought the chamber that Connor used as a workroom and found him there with several others he knew. As they began their discussion, Athdar found his thoughts distracted by a heart-shaped face surrounded by pale blond curls and the blue-green eyes that were ever filled with merriment when they met his. And the full, pink lips that tempted him to madness. His body went along with these thoughts and reacted in surprising manner. Athdar shifted in his chair, gaining Connor’s attention.

“Are you well?” Connor asked, offering him a cup of wine.

“I am,” he replied, taking a mouthful of wine to give him a moment to focus his thoughts on the business at hand and not on the lovely and forbidden Isobel. “About the preparations for winter?”

Try as he might, even as Connor went back to explaining their plans, and his clan’s part in them, Athdar thought about Isobel.

And the fruitlessness of any interest he might have in her.

Glancing around the chamber and realizing that most of those there were happily married, the heartache pierced through him as it always did.

Happy, he might be, but married he would never be again.

The disasters of his previous marriages and the most recent betrothal had made his decision for him—he would not subject any woman to the dangers of marrying him.

Especially not the lovely Isobel.

The tragedies of his past would haunt his every day and night, but he would not risk someone as precious and vibrant as her to the chance that he was truly cursed.

Some would laugh and call him foolish. People died. Women died, especially in childbirth or such manner. But then they would recall that he’d lost two wives to death, a betrothed to an accident and two possible wives to the fear of all that would befall them if their fathers agreed to matches with him.

So, in spite of any desire he had to find a wife and have a family as these men had, Athdar understood that the fates stood against him. Standing and walking to the window, he listened and replied to Connor from there.

As though his thoughts had conjured her up, Rurik’s daughter passed into his view as she walked through the yard in the direction of the practice yards. She and her friend had their heads close together, conspiring no doubt on some feminine matter, as they laughed and glanced at the men practicing their fighting skills. He emptied the cup and placed it on the nearby tray.

“I will accept your invitation to stay for a few days, Connor.” He strode towards the door, ignoring any questioning glances. “I must check with my man about some of the supplies we need.”

“Your sister is in her solar, Dar,” Connor said.

“I will seek her out later.” Lifting the latch on the door, he pulled it open. “I will return shortly.”

His feet led him outside before he could consider how strange his behavior was. Something, someone drew him as through a rope connected him with. . . her. When he realized his dangerous actions—dangerous to his own well-being and hers—he slowed down and sought Ranald instead.

His plan almost worked, too, until he heard Isobel gasp out his name as he landed face-first in the dirt from a well-aimed punch. How was he ever going to ignore her when every fiber of his body and soul wanted to claim her?