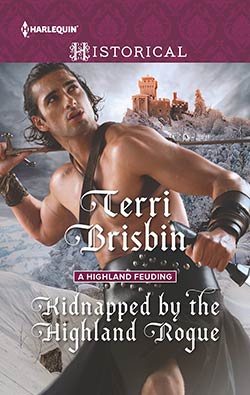 There's more to hardened outlaw Niall Corbett than meets the eye. Despite his merciless reputation, he's on a mission he must defend with his life. One that means taking beautiful Fia Mackintosh prisoner for her own protection!

Fia may have dreamed of being swept away by a gorgeous Highlander, but never of being held hostage by a gang of outlaws! While her head screams for her to run, her heart beats a little too fast for her captor, a man she shouldn't, yet can't help but trust…

It did not take long to notice her.

A young woman, tall and lithe, walked past him and was trailed by a young man who he took little notice of. But, it took only one glance to assess this situation. The young man, awkward and lanky, wanted the woman. The woman barely gave him a moment’s attention. Until she stopped and turned, giving Niall his first good look at her.

Good God, she was a beauty!

She wore a plain gown, but that was the only unremarkable feature of hers. Green eyes the shade of the summer forest. A gently sloping nose that led his gaze down to the most perfect mouth and lips he’d ever seen on a woman. She said something to the man and he imagined how her lips would taste and feel against his own. How her voice would sound as she whispered his name….

Niall shook his head, trying to understand the strange wanting that this woman caused. Tossing the last bit of bread in his mouth, he chewed it slowly while sorting out the cause of his reaction to her. He was not an untrained, inexperienced lad with no history of involvement with willing women. Before, before he became Iain Dubh, he had had his share of lovers and even since becoming this rogue, women had sought him out for bed play.

Nay, inexperience did not explain it. So, he stepped into the shadows of the path where he would not be seen and watched the exchange between the two.

Even without being able to hear their words, he could decipher what was happening. The man was trying to convince the woman to accept his offer. He shuffled from side to side, unable to meet the beauty’s gaze for more than a moment or two. Truly, Niall doubted he could have for much longer than that.

Then, the woman took the man’s hand and was clearly attempting to be kind about her obvious refusal. Was the man making an offer of marriage? He was bolder than Niall thought him to be if that was happening,

‘Dougal!’ the beauty said louder now. Ah, the hapless lad was called Dougal. ‘I have been as clear as I can about a match between us. I pray you to leave the matter now.’

Dougal, the hapless lad, opened and closed his mouth several times, trying to say something. The lad’s rebuttal to the lass’s refusal, Niall suspected. But the determined young woman—was she an Isabel or a Margaret?—did not give him the opportunity. She released his hand and stepped back, a clear message to one who had eyes to see it.

Niall let out a sigh and retrieved the apple he’d been carrying in his sack. Biting into it, he continued to watch this unexpected bit of entertainment to ease the waiting.

Bloody hell! He needed to get into position and realised the lass, and lad, would be in the middle of the coming disturbance. Glancing around, he wondered how to steer her away from it. Niall saw that his presence had not been noticed. Mayhap if they saw him, they would leave this area and go in some other direction?

He’d seen many other men and women in the months with this gang and had never thought of warning one of them, so why now? Why her? For it was the lass for whom he was concerned.

Without truly thinking about it more than that, he stepped out of the shadows, making enough noise to ensure she would hear him. And she did, stepping back even further now from young Dougal. She raised her eyes to his and Niall lost his breath with wanting and need for this perfect stranger.

Sucking in a breath, he nodded at her but remained where he stood. He wanted her to move down this pathway and away from the village well on his right. Tugging the reins of his horse, he slowly walked in front of her and she turned back to her companion and in the direction he wished her to go. After only a moment’s contemplation of her choices, the beauty faced him once more, staring at his face as though deciding if they had a past introduction.

He would have remembered meeting this one but could not. He’d never travelled to the lands of the Mackintosh and Cameron clans before this. If he’d seen her at court, his appearance would have been very different that it was now with dirt and grime covering most of his face and features and the worn and torn clothing of a band of men living on the road.

This close, he could see that her eyes were even more spectacular than at a distance, glimmering in this sun’s light as though touched by fae magic. Her gaze narrowed and he felt the heat of arousal race through him. Wiping the back of his hand across his now sweaty forehead, Niall struggled with his control.

‘Good day, sir,’ she said quietly, still searching his face. ‘Do you have need of something?’

Did she have to phrase her words so? His randy bits took a different meaning from them than the simple courteous one she meant. The sound of her voice, soft but with deep tones tracing through it, was as sensual as he’d thought it would be. Before he could reply, hapless Dougal walked to her side, and even took a step closer, positioning himself as her protector. The poor lad would never stand against what was coming.

‘Good day to ye both,’ he said, making his accent rougher to blend with the more common one of the gang. ‘Nay, just travellin’ on and stopped for a drink from the well there.’ Niall nodded at the stone structure—a common reason and place for visitors to stop.

‘The dipper sits in a bucket at its side,’ the beauty replied. Hapless Dougal glared and crossed his arms over his meagre chest, mayhap able to read more in Niall’s gaze at the young woman than she did.

Niall pulled his horse along, blocking the rest of the path, and feinted towards the well. The sound of stirring trouble began echoing into the clearing. The other two glanced to the source of the sounds and the woman took a step towards it. Without thinking, Niall grabbed her by the shoulders, ignoring her gasp, and pushed her in the other path.

‘Go. Now. Away from here,’ he whispered fiercely so that only she could hear his words.

She stumbled back a few steps and into hapless Dougal who caught her. Niall could waste no more time here without exposing himself to the outlaws, so he did not spare another glance at her. Instead, he mounted and rode off towards the growing disturbance, knowing he must play his part.

The lass would have to see to herself, no matter how much his randy bits wanted him to do otherwise. That he had to force himself not to look back at her told Niall that she was more dangerous to him than any other challenge he’d encountered thus far. And these last months had presented him with many more than he’d ever thought to face.

The spreading chaos and noise drew his full attention now and he could give little more thought to the enticing, green-eyed temptress.