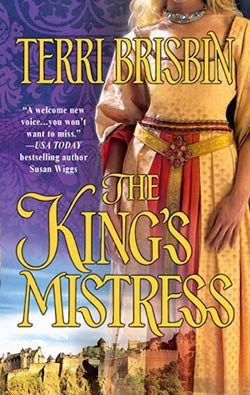 Loyalty forced him to marry the king’s cast-off mistress. . .

Given no choice in the matter, Orrick of Silloth marries the king’s mistress. His attempts to deal with her in a thoughful manner are unsuccessful as he discovers emotions he never expected to feel.

Abandoned and rejected by the king, Marguerite is on her own for the first time in her life and does not know who to trust. Her mind tells her Orrick is honorable, but will her heart ever feel the same way?

"Witnessing the skillful development of this impossible match into romance is a pleasure. Brisbin cleverly sets up an environment hostile to love that is a delight to see transformed by these true lovers."

"THE KING’S MISTRESS is a wonderful depiction of medieval life. In this well-written tale, Ms. Brisbin brings to life the dazzle of Henry's court and the everyday existence of the common people. Marguerite was brought up to believe she would be Henry's partner once he decided to remove his queen, so Marguerite's downfall was demoralizing and frightening. A wonderful hero, Orrick is also very human, and his wife's confusing treatment of him tests his strength and honor. Realistic dialogue, great secondary characters, and a beautiful love story made THE KING'S MISTRESS an enjoyable read.

Author of THE DUMONT BRIDE, THE NORMAN'S BRIDE, and THE COUNTESS BRIDE, Terri Brisbin has penned another winner with THE KING'S MISTRESS."

"With a superb gift for characterization, Brisbin creates a complex, completely fascinating heroine in strong yet vulnerable Marguerite, and her bold, vivid writing beautifully captures the flavor of medieval castle life and the intrigue-rich Plantagenet court. Passionate and romantic, The King’s Mistress is a rare delight."

"An author faces a great challenge in writing historical romances featuring actual historical figures. When the author isn't up to meeting that challenge, historical figures can be reduced to one-dimensional props or they can just as easily go too far in the other direction and end up overshadowing the fictional protagonists of the story. In her latest novel, Terri Brisbin strikes a good balance between the two and gives readers an enjoyable romance in which a real-life king plays a rather important role. . . The romance between Orrick and Marguerite is an interesting one. . . watching Marguerite and Orrick change in their attitudes toward one another is enjoyable.

Brisbin also does a wonderful job of evoking her setting. Henry II plays an important role in the story, and he is far from a one-dimensional prop. In addition, Brisbin uses a wealth of small details to show what life was like at court, in a monastery, and in a keep without inserting lectures that would distract from the plot, resulting in both an entertaining and informative story.

. . . The King's Mistress is a fun and unusual read. Brisbin strikes a good balance between showing some of the harshness of Medieval life while not making the atmosphere too bleak for a believable romance. This is difficult to do, but always a pleasure when done well, as Brisbin manages here."

Lady Marguerite requested that they meet at terce and, as that hour approached, Orrick left his chamber and proceeded down the corridor to a smaller room designated for their encounter. The bells calling the religious to prayers began to echo from somewhere close by as he entered the chamber. Knowing the practice of women to be late, Orrick did not dream that she would be waiting for him.

As he closed the door behind him, he realized that the gossip about her beauty and gracefulness had not been an exaggeration at all. As she lowered herself to a deep curtsy before him with her head bowed demurely and even more womanly curves and contours revealed to him, the baser part of him responded as well. This could work after all. She would not be so difficult to bear as a wife.

"My lady," he said as he acknowledged her obeisance and held out his hand. "Please rise now."

The softness of her fingers against his work-roughened hand sent fire through him. And when she finally raised her gaze to his, he knew he was lost.

Her hair did indeed reach nigh to the floor in spite of some decorations and jewels that were woven into the curls surrounding her face. His hands itched to touch it and feel it and even to bring it to his face and inhale the fragrance of her that was carried by it. When she moved her head, her hair cascaded in flowing waves over her shoulders and arms and down her back. In an instant, his mind pictured her how she would be later in the night—in his bed, naked, with only her hair to shield her.

Shocked by his carnal reaction to simply meeting her, Orrick knew he must tame this beast within him or appear the barbarian she surely thought him to be. Stepping back and motioning to a bench, he allowed her to sit. A few steps across the chamber and he felt a bit more in control. Until she spoke.

"My lord Orrick, I am pleased to have this chance to meet you privately. My thanks for granting what must seem a strange request by a bride on her wedding day."

Soft and incredibly feminine, her voice carried within a hint of huskiness and once more his body betrayed him. That underlying tone would be evident as she cried out her pleasure in his bed. He saw her naked and writhing against him as he filled her with his seed and as their satisfaction poured forth from both of them in loud cries. He closed his eyes for a moment and then realized her power.

Orrick had come to this day, aware of the gossip and the tales told about her ongoing liaisons with the king. He had armed himself with a healthy measure of suspicion so that he did not become anyone's fool in this. And, believing that he did not make decisions with his cock, he had felt completely at ease with his ability to assess the lady and the situation and handle all of it.

In but a few moments her beauty, her blatant sexuality and her silent promises about what would be his to ensorcelled him. With a curtsy and a nod, with shake of her hair and an enticing scent and with simple words she had ensnared him in her trap. Now he stood before her, hard as stone and wanting her more than he had ever wanted a woman. The urge, the need, to touch and taste and hold and have and fill and claim and mark her as his own grew until he feared it might overwhelm him. Looking around the chamber, he spied a small table with a jug and some goblets. He used it to break her spell.

"Wine, my lady?" He poured some for himself, managing not to spill it in spite of the way his hand shook. Without waiting for her reply, he filled a goblet for her and brought it to her.

"My thanks, Lord Orrick," she whispered as she lifted the wine to her mouth.

He watched as she finished her sip and as a drop of the sweet dark liquid began to trickle down from the corner of her lips. Even as his body moved forward to her, Marguerite used the tip of her tongue to catch it. He could not allow this to continue. Pulling his control around him, Orrick stepped back.

"And the reason for this meeting?"

"Why to meet you, my lord! I know 'tis not so unusual for those of our status to marry without ever setting eyes on each other," she paused and let her gaze move over him in a provocative way. Just as he could almost feel her touch, she continued. "But, His Grace, the king, allowed this breach of etiquette because we have long been friends."

There! He needed to let her know that he was no man's fool, not even the king's. He might be forced to take Henry's castoff lover as wife, but Orrick would not pretend he did not know the real relationship between Henry and Marguerite. Not even to her, not even to assuage his own pride.

Her reaction surprised him. She stood and handed him the cup. Walking to the door, she faced him. The soft expression on her faced changed to a much harder one, one that sapped most of the beauty from her features. She stood taller and stared at him with a look that sent icy chills down his spine.

He had seen the sensual, enticing, womanly Marguerite at first.

This was the angry, controlling, warrior-like Marguerite.

"Although I owe you nothing, Orrick of Silloth, I know that you are forced to this marriage as I am and want you to know the truth."

He lifted the cup to his mouth and swallowed the wine in one mouthful. "And which truth would that be, my lady?" Did she plan to admit that she had shared the king's bed and mayhap even had his love?

"This marriage will not happen. I am somewhat sorry that you have been drawn into this misunderstanding between the king and me, so I wish to warn you of what is to come."

Was there some other plotting going on? Did the king have some punishment in mind for some imagined wrongdoing on his or his father's part? Why this sham of marriage if Henry planned to arrest him on some charge? His gut tightened and he worried about what would happen to his people if he were imprisoned or hanged. Finally, he took a breath and asked.

"My lord Henry is simply using this charade to put me in my place. I overstepped myself and he wishes me to know what he could do if he is displeased with me. I fear you have been caught up in a lovers' quarrel."

The roiling in his stomach lessened a bit as his own suspicions grew. Would Henry go through all of this very public display of giving her in marriage and then default at the last moment? Orrick had signed most of the papers involving the transfer of property and titles and, indeed, had received a portion of the gold promised already. Aye, a king could undo all of that with a word, but would he?

"Henry will call off the wedding today?" he asked, searching for something more. His instincts told him there was much more going on here.

"Of course he will! He loves me and will not give me away to some northern lord who never attends court." She must have seen his look of disbelief for she added, "I was raised as consort for a king, not some...some..."

"Barbarian of mixed blood, my lady?"