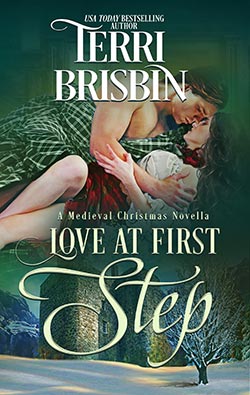 When Scottish warrior Gavin MacLeod visits his English foster brother for the winter holidays, he never expects to find a woman who appeals to him like the intriguing Elizabeth does.

Forced to leave her family and life behind, Elizabeth found sanctuary at Silloth Keep. Will she be strong and brave enough to face her future when Gavin offers her a chance at love?

"It takes wisdom to know what's hidden within another's heart, and the talented Brisbin gives us a peek in "Love at First Step", as an old Scots warrior and a woman torn with guilt discover the healing power of love."

When Scottish warrior Gavin MacLeod visits his English foster brother for the winter holidays, he never expects to find a woman who appeals to him like the intriguing Elizabeth. Forced to leave her family and life behind, Elizabeth found sanctuary at Silloth Keep. Will she be strong and brave enough to face her future when Gavin offers her a chance at love?

Elizabeth tested the steaming water with her elbow and nodded, pleased that it was hot enough but not too. Looking over the small bottles and jars on the tray, she chose several and added an amount of each to the water. Fresh and soothing scents filled the chamber as the oils mixed with the steaming water. Stirring them with her hand, she nodded again. The bath was ready, but where was Lord Gavin?

As if his name in her thoughts had conjured him from nothing, the door opened and he stood just within the frame. Silhouetted by the torches in the corridor, she could see nothing but the outline of his form.
'Tis ready, my lord." She walked to the door as he stepped into the room. Trying to keep in as much heat as possible, she closed the door behind him. Beads of sweat, from both her exertions and from the heat, trickled down her neck and back. Using the back of her hand, she wiped it from her brow.

The man stood before the large tub and just stared at it. Was there a problem? What did he need?

"Did you pick out the scent yourself?"

"Aye, my lord. The oils are from Lady Margaret and will soothe the roughness and dryness of your skin. If they are not pleasing to you, I could change them."

It would take four servants each carrying two large buckets of heated water to refill the tub, but it could be, would be done, if he so wished.

"I should have waited for you before adding them, my lord. I beg your pardon." She leaned her head down respectfully, awaiting his decision. In truth she chose scented oils that reminded her of the coming festivities-pine, holly berry and Lady Margaret's precious balsam.

"I asked because 'twas an appealing combination, not because it displeased me."

Without meeting his gaze, she busied herself organizing what she would need for his bath. Cloths, jars of soap, extra buckets of water, drying linens. She laid them out near the tub so she could reach them easily as she needed them. All in an effort to avoid watching him undress. When she could wait no longer, she looked across the room to where he remained . . .fully dressed and watching her every move.

"The water is cooling, my lord," She said as she held out her hand over the bath. "Do you need help with. . . your. . .?" she did not finish the words, but simply pointed to him.

"I am not such a bairn that I need help getting undressed," he answered in a voice so deep and smooth that it reminded her of warm honey, fresh from the hive on a summer's day.

He seemed bothered by something. Was she not brazen enough toward him? Was he waiting for her to take charge of this? After all, everyone knew that a male guest asking for 'a bath' was simply another way to speak of their desire to tup. Elizabeth stepped closer and reached for the ties on his tunic.

"Nay, lass," he said, stepping back. "I can take off my own clothing."

His words were not harsh, but she felt the rebuke. Mayhap she had misread the situation? She would not overstep her place again with him. Turning her back to him, she walked to the side of the tub and waited there. Busying herself by checking the water, she did not watch his movements. Elizabeth could see him out of the corner of her eyes and when he turned his back to her, she took advantage of the chance to take a closer look at him.

He was of the same age as Orrick, having just over two score of years, and his experience as a warrior showed on his body. The scars of old wounds covered parts of his back and even one thigh, but they did not detract from his physical beauty. His long, dark-red hair was liberally sprinkled with grey and fell below his shoulders. Wide, brawny shoulders they were, as was his back. A narrow waist and hips led to strong, muscular legs. The perfect male body. She sighed, imagining what the front of him would look like. So deep in her thoughts was she that she did not notice him turn at the sound she made.

Aye, he was impressive. And he was watching her as she watched him! Now, he stood before her, naked as the day his mother birthed him.