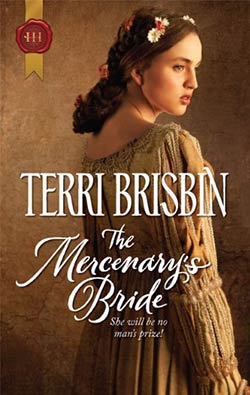 Brice Fitzwilliam is finally paid his due: awarded the title and lands of Thaxted, the warrior waits to claim his promised virgin bride!

But Gillian of Thaxted will be no man’s prize! She will not submit to the conquering knight’s powerful physique, dark, piercing eyes or the bold way his arm drapes protectively over her at night....

Brice thought he would pleasure his new wife out of duty—but it’s become a nightly pleasure of his
own! Now he risks exposing a chink in his armor if he succumbs totally to his new bride....

The Knights of Brittany — Born to conquer … and seduce!

“Brisbin’s latest Knights of Brittany book is just as thrilling and passionate as the rest. There’s war and betrayal and treason, but love conquers all. Brisbin excels at immersing readers in history and bringing her characters to life.”

Bishop Obert summoned the second of the knights on the list he’d prepared those months before to benefit from the king’s generosity to meet with him. He carried the papers with him that would turn the knight into baron and make a penniless bastard into a rich lord—if he could take the lands granted him from the Saxon rebels who still held them.

Obert paced along the length of the table waiting for Brice Fitzwilliam, bastard knight from Brittany, to arrive. If he was to make it back to London before the king’s coronation, he must leave on the morrow and this was his last duty here in Taerford. Regardless of the winter closing in around them, regardless of the yet-unsettled lands and regardless of his own wants or needs, he was Duke William’s loyal servant. After God, of course, he mused as he turned towards the group of men now approaching.

As seemed to be their custom, the new lord of Taerford, Giles Fitzhenry, walked side-by-side with the man for whom Obert waited. Thinking back to his weeks here, he rarely saw one without the other, whether in the hall or yards, in any task needed to be done here in Taerford. They strode in, followed by others of Giles’ men, fresh from practicing their fighting skills in the yard. They became quieter with every step closer and bowed as one to him.

The implications were not lost on anyone listening and the hall grew silent as they waited on his words. The surprise filled the warrior’s face until he laughed aloud with joy. If it was inappropriate, Obert could understand it—as one bastard pleased by the success of another who share his status. The ripples of cheering and shouting ebbed quickly as the entire hall watched and waited on the declaration.

Obert motioned the knight forward to kneel in front of him. Although this should be more ceremonial and formal, and before the duke himself, the dangers of the times and place gave way to expediency. Lord Giles stood, once more, at his friend’s side, placing his hand on Brice’s shoulder and smiling as Obert continued.

“In the Duke’s name, I declare you Brice Fitzwilliam, now Baron and Lord of Thaxted, and vassal to the Duke himself,” Obert intoned. The pledging of loyalty directly to the duke, who was soon to be king, ensured a network of warriors who owed their lands and titles and wealth to only him, with no other liege lords between them. Obert could not fight the smile that threatened, for it had been his idea to do so. “As such, you have the right to lay claim to all the lands, the livestock, the villeins and other properties owned or held by the traitor Eoforwic of Thaxted before his death.”

Although the Normans and Bretons present cheered, the peasants who’d lived on this land and claimed Saxon heritage did not. He understood that the victors in any engagement deserved everything they fought so hard to gain, but the compassionate part of him also understood the shame of being the defeated. However, this day belonged to the victorious Breton knight before him.

“The Duke declares that you should marry the daughter of Eoforwic, if possible, or seek another appropriate bride from the surrounding lands and loyal vassals if not.”

Obert handed the new lord the package of folded parchments which carried the grant of lands and titles. Holding out his hands, he waited for Brice to offer his pledge. In a deep voice that shook from the power of this promise, Brice repeated the words as Obert’s clerk whispered them.

“By the Lord before whom I, Brice Fitzwilliam, now of Thaxted, swear this oath and in the name of all that is holy, I will pledge to William of Normandy, Duke and now King of all England, to be true and faithful, and to love all which he loves and to shun all which he shuns, according to the laws of God and the order of the world. I swear that I will not ever, with will or action, through word or deed or omission, do anything which is unpleasing to him, on condition that he will hold to me as I shall deserve it, and that he will perform everything as it was in our agreement when I first submitted myself to him and his mercy and chose his will over mine. I offer this unconditionally, with no expectations other than his faith and favor as my liege lord.”

Obert raised his voice so that all could hear.

“I, Obert of Caen, speaking in the name and with the authority of William, Duke of Normandy and King of England, do accept this oath of fealty as sworn here before these witnesses and before God and do promise as that William, as lord and king, will protect and defend the person and properties of Brice Fitzwilliam of Thaxted who here pledges on his honor that he will be ruled by the king’s will and his word. In the king’s name, I agree to the promises contained herein this oath unconditionally, with no expectations other than his faith and service as loyal vassal to the king.”

Obert allowed the words to echo through the hall and then released the new lord of Thaxted to stand before him. “To Lord Thaxted,” he called out. “Thaxted!”

The men joined in his cheer then, stamping their feet and clapping their hands and he permitted it to go on for several minutes. Lord Giles pounded his friend on the back and then pulled him into a hug that spoke of years of toil and triumph together. Only when Obert spied Lady Fayth entering the hall did he realize he must speak to Brice about the woman involved. As he watched the expression on the lady’s face change several times as she approached and heard the news of Brice’s grant, he knew that the weaker sex had a way of making things difficult for the men chosen or designated to oversee them as lords or husbands.

Obert noticed the hesitation in the lady’s greeting and in her congratulatory words even if no one else did. Ah, the soft feelings of women did ever make things more difficult for men. As Lord Giles took her hand and stood by her side, Obert comprehended the biggest difference between the two knights now made lords by their king.

Lord Giles had not had to hunt for his wife once he’d fought his way to his lands.

He could not say the same for Lord Brice.

The ground beneath her feet began to shake and Gillian searched for a cause. ‘Twas a fair day considering that winter still claimed the land, but no clouds marred the sky’s bright blue expanse. Looking up, she could see no sign of a coming storm that would cause the thunderous noise that covered the area.

Pushing her hood back, Gillian stepped into the road and glanced both ahead and behind. With only a moment to spare, she realized the cause for such a clamor and jumped back into the tangle of brush and bush at the road’s edge. With a prayer of thanks offered that she’d stolen a dark brown cloak on her escape, she tugged it around her and lay still as the large group of mounted knights and warriors thundered past her hiding place. When they pulled up a short distance from where she lay motionless and silent, she dared not even breathe for the fear of being detected and captured by these unknown marauders.

Too far away to hear and too low to understand, their words were a jumble of Norman French and some English as well. Keeping her face down, Gillian waited for them to move on their way. When she heard the sounds of men dismounting and walking along the road, her body began to tremble. Being caught out alone, during these dangerous times, was an invitation to death or worse and something Gillian had taken pains to avoid.

Her decision to leave her home and flee to the convent was not made in haste or without considering the consequences, but her alternatives were limited and not attractive—the marriage her brother Oremund had arranged to a poxed old man or one the invading duke had made to a vicious Norman warrior on his way to destroy all she held dear. All she could do was stay out of sight and pray this troop of soldiers would move on and her quest to reach the convent would continue.

Gillian waited as the men discussed something and held her breath once more trying not to gain their attention as their voices grew nearer to the place where she hid. She recognized the name of her home and her brother’s as well. If only they would speak in her tongue or at the least speak slower so that she could try to understand more of their words!

After a few seemingly-endless minutes, the men began to walk away from her, calling out to the others that they saw nothing. She raised her head with care and as slowly as she could and watched their retreat. But, one knight remained in the road not more than several yards from where she lay. Instead of following the others, he reached up and tugged at his helm, pulling it free and tucking it under his arm as he turned.

The gasp escaped before she could stop it.

He was tall and muscular and the most attractive man she’d ever beheld, even considering her cousin who was accounted to be every woman’s dream. He did not wear his blond hair in the short, shorn Norman-style; instead it hung loosely around his face. She could not tell the color of his eyes at this distance but his face was all masculine angles and intriguing in spite of his being a Norman.

A Norman! And a Norman in full battle armor.

Holy Mother of God, protect her!

And he was staring into the trees in her direction....