One thrilling tournament. Seven unique stories of love! Read them all!

MIDSUMMER KNIGHTS
Summer, 1193. England is in turmoil, and a great tournament is scheduled near the border of Scotland and England. The greatest knights and lords from England, Scotland, Ireland, and France have gathered to compete for a great prize. There will be celebrations, jousts, and feasting. It will be an exhibition of chivalry and warrior skills, a breeding ground for treason…and for love.

When the only man she can trust is known for his dishonorable past, what could go wrong?

Thomas Brisbois of Kelso has only one goal when he arrives at the tournament--to defeat the only knight who ever bested him in battle. If he succeeds, the Scottish king will return to him his lands, his honor and his life. He has little interest in other prizes, and even less when he learns that the lord for whom his rival fights has included a daughter among the spoils at stake in their contest-- a lovely daughter with no desire to play the pawn, or to see her father's champion win. She is a distraction, all the more after she explains her own ideas about which knight shall have her, and how and when.

Annora may be a pawn in her father’s plans but she has no intention of letting that happen without a fight of her own. When she sees the frank desire in Thomas’ gaze for her, she makes her own offer—she’ll help him win if he’ll let her go. . . after he beds her. Her plans go awry when she discovers the truth of the man beneath the armor. The man who had lost everything and struggles to regain his life.

Only the ultimate tournament battle will reveal if she’s made the biggest mistake of her life or if she’s found the answer to all her problems in trusting an outlaw’s honor.

“Have a care, Niece,” Annora’s aunt began. “Your father is playing a dangerous game between the king and his brother. He proclaims loyalty to his liege lord Richard while giving gold to the brother.”

Annora suspected as much, for she’d heard that many nobles did the same. The king had been gone on Crusade for years and never seemed to have a care for his people here in England except when he needed their gold. His brother was the same, but John, son of Henry Plantagenet and Annora’s legendary namesake Eleanor of Aquitaine, divided his time and attentions between the Plantagenet lands on the continent and their kingdom in England. Some thought too much time in England, but ‘twas clear to anyone aware of the situation and the ebb and flow of support that he was looking to the future and consolidating his power now. No one spoke of it openly, for to do so would gain his attention and animosity and both of those could be dangerous if not deadly.

“Your words of warning would be better spoken to my father, Aunt.” Annora shrugged. “I am the one least able to heed your counsel. He cares little for me, since I am neither a son to continue his claim here nor am I the biddable daughter he demands.”

“You can be used for his purposes, Annora. So, you have value to him. Your blood will continue his line. Your marriage will keep these lands in his line, under his control.”

“The king decides the fate of the title and the lands,” her aunt finished her words. “Or the man who holds his authority. I would expect to hear news of arrangements for your betrothal if not marriage in the coming weeks.”

As Annora realized the truth in her aunt’s words and the enormity of the implications, a clatter rose near the entrance drawing her and her aunt’s attention. And the attention of everyone in the great hall whether servant, visitor, or kin. Annora stood as a huge man entered.

He stood at least a foot taller than most in the hall who gaped at his every move. Reaching up, he lifted his helm from his head and pushed back the hood under it, exposing his lack of hair at once. Wearing a mail hauberk that reached down his long legs to his knees and heavy boots beneath it, his every step could be heard as he made his way towards the front of the hall, following one of her father’s men. But, he did not follow meekly. Nay, he surveyed everything and everyone there as he walked with the assurance of power in his stride. His gaze fell on her and Annora could not help the gasp that escaped her.

‘Twas not the polite expression of some supplicant knight. Nor was it respectful. After he directed a question to and received some answer from his escort and the man changed his path and walked to where she stood. Annora fought the urge to seek cover. Her feet had backed her up towards the stone wall behind her before she realized it and knew how it would look to those observing this encounter. She crossed her arms over her chest and watched his approach.

“Know thy enemy,” her aunt whispered, startling her. She’d not even noticed Eldrida at her side.

“Well, a man like that is not your friend.”

A shiver coursed through her body as he grew close enough for her to see that his eyes were brown and that he indeed was more than a foot taller than her, too. Gathering her wits about her, Annora watched him stride through those nearer her with the grace and manner of a predator. Though his gaze rested on her mostly, he never stopped studying the place, the people, the path and, she noticed, the ways out of the hall.

When he stopped before her, she lost the ability to think.

He was the most beautiful, most arrogant, tallest, most masculine person she’d ever seen. Annora stared at his face, with its slight scruff of beard unshaven and its hard angles that made him terrifying in a male way. Her gaze moved down to take in his height, the width of his shoulders, the massive size of his arms and thighs visible and intimidating under the chain mail and gambeson he wore.
He tucked his helm under his arm and smiled at her. ‘Twas not a welcoming, warm smile. For a moment, she felt like the prey to his predator, waiting and holding her breath for him to make the first strike against her. Her body filled with an awareness she’d never felt before—parts of her ached while other places tingled. She fought to draw in a breath as the anticipation surrounded her like a vice.

The knight moved closer and leaned over to her, holding out his hand for hers. He wore no gauntlets or gloves, they lay tucked under his belt at his waist, and so his hands were revealed to be strong and as large as he was. Without thought, she offered her hand and Annora felt the callouses created by hard use rub against her palm as he took it. Lifting it higher and higher, he paused then until she was forced now to look up to meet his eyes.

His gaze was hungry.

When he brought her hand to his lips in a gesture of greeting and honor, Annora could not be sure that he would not bite her. Another wave of aching, terror, want and anticipation filled her as he held her hand beneath his mouth for a moment without moving. Then, his brown gaze locked with her own and he inhaled slowly before touching his lips to her skin. Scenting her, like a predator did before the attack.

Without moving his gaze from hers, he opened his mouth and kissed her hand in a most inappropriate way. Insulting, really, for his mouth lingered too long and his tongue touched her skin. The heat of him moved through her, overwhelming her in a way she could not describe. Then, he smiled.

A smile should soften one’s expression. It should show pleasure or acceptance or happiness. It should.

This man’s smile simply confirmed what she already knew about him—he was handsome, he was strong, he was dangerous in a way she’d never encountered before. Yet, as he watched her in those few moments, she did not fear that he would harm her. Annora thought he would simply consume her. He would take everything she had to give and want more. He would do things to her. . . .

One thrilling tournament. Seven unique stories of love! Read them all!

MIDSUMMER KNIGHTS
Summer, 1193. England is in turmoil, and a great tournament is scheduled near the border of Scotland and England. The greatest knights and lords from England, Scotland, Ireland, and France have gathered to compete for a great prize. There will be celebrations, jousts, and feasting. It will be an exhibition of chivalry and warrior skills, a breeding ground for treason…and for love. 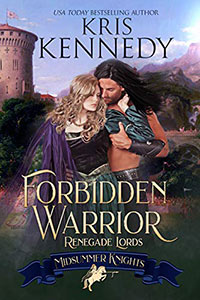 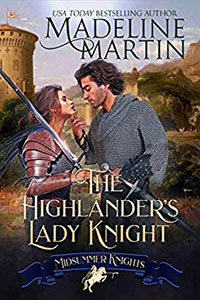 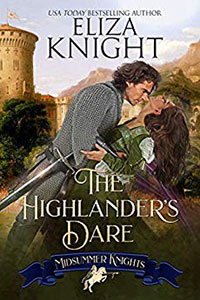 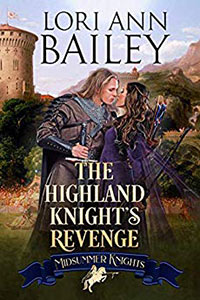 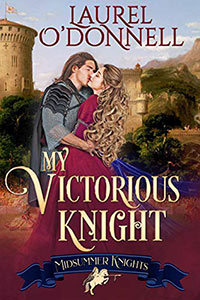 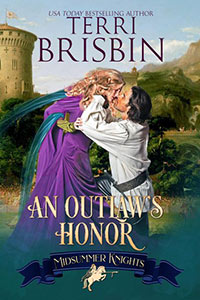 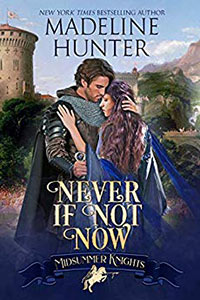