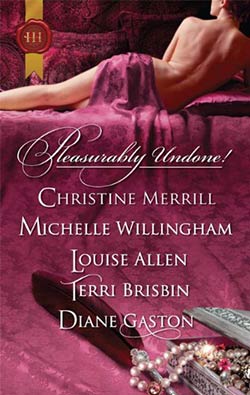 Featuring "A Night for Her Pleasure"

A NIGHT FOR HER PLEASURE introduces the Knights of Brittany trilogy, three illegitimate knights and one noble who serve William the Conqueror during his invasion of England and is loosely-based on the theme of the O.Henry story, A GIFT OF THE MAGI. Simon and Elise are two people in love who only want to do or be what the other person wants or needs and who are both trying to ignore their own desires and dreams. They spend their wedding day learning about each other and pledging that they will be exactly what the other wants in a spouse. The results are not quite what either expects, but when the heart is involved, nothing goes as expected.

“Look at her,” Simon ordered, nodding in the direction of his. . . wife. It still felt strange and new to him to call her that, not difficult to understand since they’d only married this morning. “Just look at her.” His blood heated just glancing at her.

Giles, Brice and Soren all turned to look across the crowded hall to where the women sat in various groups during the wedding feast. Elise had made her way over to her mother and her cousins and sat chatting with them, all the while enticing him with her innocent demeanor and simple beauty.

“She seems to be in good spirits, Simon,” Brice offered. “Though I am surprised she is here.”

Simon turned and realized that his friends were looking at the wrong woman. Before he could correct them, Giles interrupted.

“As am I. Alianor looks unseemly happy for a woman who is losing her lover and protector to the clutches of a wife.” Giles held up his cup in a salute to Simon and then to Soren. “Mayhap she will be looking for a new one, Soren. What think you of her beauty and manners?”

Soren opened his mouth to speak, but laughed instead. “I will wait to see how smoothly things go between Simon and his wife. He may be back in Alianor’s bed sooner rather than later and my efforts would all be for naught.”

Simon’s graphic curse stopped further discussion of his mistress and startled some who stood close by their group. Turning his back to them, he lowered his voice.

“I was speaking about Elise, you fools, not Alianor.” Simon drank the rest of his wine in one swallow. “Bastards,” he cursed under his breath.

“Without a doubt, my lord,” Giles said, nodding to Simon. Stepping closer, he smacked Simon on the back and laughed. “We but sought to ease the moment.”

“Am I that obvious then?” Simon could feel the tension growing within him over the coming night. . . and taking Elise to his bed. He’d wanted her the moment he watched her dismount in front of his keep and now that she was his in the eyes of the law, he only wanted her more.

“Just as much as any other groom, Simon,” Brice offered.

Glancing across the room again, he watched as she smiled and nodded at something one of her women said. His body reacted strongly to her beauty and her femininity. And the thought of holding her in his arms, touching her skin, tasting her essence and initiating her into the pleasures of the marriage bed this night made him harden yet again.

Then, as he watched his friends appraise her, the heat of jealousy pierced him. The three drew women to them like flies to the sweet and he had no doubt that, if any of them turned their real attentions to her, they could show him up for the rough, brutish man he truly was with their experience with the ways of wooing women. It was only the hope that he could be different for her, different to her, that allowed him to believe he could make her happy in this marriage.

As though his thoughts had called her name, Elise raised her pale blue eyes and met his gaze. Tossing the hip-length waves of auburn hair over her shoulder, she tilted her head a bit. His throat tightened and his mouth grew dry, but his blood pulsed and his heart raced as the corners of her mouth lifted into the gentle smile he was coming to crave. Soon, she would truly be his. The sound of his friends’ whispers drew him from his lost moment and back to the problem facing him about the coming night.

“She is yours, Simon. Surely you know that even as everyone in this gathering does,” Soren assured him. “What is it that has your ball. . . trews twisted in a knot?”

The others laughed at their friend’s witticism, but Simon did not. Taking in a breath and letting it out, he turned to face them. In a lowered voice, he finally admitted his deepest fear.

The others looked one to the other and then back at him.

“Of course, she is, Simon. Her virtue has been well-guarded by her family. Even her dimwitted father knew enough to keep her from his plans,” Giles answered.

Elise’s father had backed the wrong noble in the dispute between the imprisoned Duke Conan and his usurping uncle Count Eudes who tried to wrest control of the region from him. Simon’s family, connected to both sides of the embattled family by blood, had remained out of the fray, but he suspected that Eudes and his progeny would still come back into power in the duchy. With their cousin William making noises of war in their direction and pressing ahead with his plans to claim England as his own, Simon could believe any number of machinations would move those out-of-favor back into favor and change the balance of power between Breton, Normandy and the other duchies and kingdoms.

“Ladies such as she deserve poetry to woo her and to gain her love. Contracts and marriage will not do it,” he began. He might be known as a lover of women, but he’d never wooed one in his life and not one so fair and so feminine. “She is so delicate and I,” he said, “I am so. . . so. . .”

“Old?” Soren asked, finishing his sentence but not with the word of his choosing. “Most women appreciate those years of experience in a man.” Soren laughed loudly and smacked Simon on his back. “Lady Alianor was heard to say just that on many occasions.”

Simon wheeled around and walked away from his friends. Even knowing that too much wine and the festive and even somewhat bawdy mood had loosened their tongues, Simon would probably punch one or all of them soon and that would bring a different end to their marriage feast than he wanted. It would show Elise the very side of him he anguished over even now. But, he grabbed a pitcher of wine from one of the servants and stalked off up the stairs to the top floor where he could be alone and watch the hall from the balcony.

By the time he reached the alcove above, a lovely widow had already approached Soren, clearly with hopes of a liaison for the coming night. Shaking his head over how easily the fairer sex fell over themselves at the feet of the ‘beautiful Bastard’, he took a deep drink of the wine in his cup and swallowed it.

“The lady is in love with you already, Simon. You have nothing to fear with her.” Giles reached his side and looked down over those gathered below them. “Take her gently and all will be well between you.”

He held out his empty cup and Simon filled it and his as well. “I have always favored my father’s family,” he offered. “We are not known for our grace or small statures.”

“Ah, but to have watched you fight with your sword in battle is to know the lie of those words. And small or large, it will all work out if you have but a care for the lady’s pleasure first.”

Simon drank down most of the wine in his cup again before Giles pulled it from his grasp.

“If you continue to drink at this rate, the only thing the fair Elise has to worry about is you falling asleep on top of her.” Giles eyed him once more. “Have you never taken a virgin before?”

He said nothing, but that was answer enough for his worldly friend.

“See to her pleasure first and then to your own. Once she has found hers, she will be more accepting of allowing you yours.” Giles drank the rest of his wine.

It seemed like a sound plan, but the strength of his desire for Elise was there in his body already for his manhood rose hard against his breeches. Would he be able to maintain control of his fierce urges when presented with Elise, naked in his embrace, finally his alone to claim?

Then, as though he had the ability to read another’s thoughts, Giles added, “You might want to seek relief before you approach your lady’s bed this evening.” Giles did not meet his gaze, but looked instead at those below.

In spite of having not visited the fair Alianor’s bed since Elise’s arrival two months ago, somehow the thought of seeking another did not sit right on him, so Simon shrugged in reply.

Giles reached out and smacked him heartily on his back. “Begin mayhap by settling her to your nearness and your touch? Surely you have kissed her? Touched her even? Pray tell me that you have managed at least that in spite of her mother’s constant presence and ever-watchful eye.”

Simon laughed aloud at that. “Her lady mother would do well as a jailer in Duke Conan’s prison tower. Nothing, I fear, gets past her steely gaze or biting tongue.”

Giles laughed too and shook his head. “Now that she is yours, you must begin to claim her. Step-by-step, my lord, much as you train your horses.”

Simon barely controlled his laugh at that one. Giles and the others had little need to use finesse and little opportunity to approach virginal ladies. With their illegitimate status, most well-born ladies did not welcome their interest or their approach.

“My friend, I would advise you never to let any woman, especially a lady, hear you compare her to a horse. You will find yourself without the warm welcome you so crave before you can blink your eyes.” Simon turned to the stairs and nodded. “Come. I think it is time to begin gentling my wife to my touch.”

“Fear not, Simon. All will be well by morning. The lady truly wedded-and-bedded and you will be at ease.” Giles’ expression grew serious. “But just in case your way is not successful, I will place a book of poetry by your bed so that you can use it if needed. ‘Twould seem that ladies do like the soft words and pledges of love.”

Simon did smile then at his friend’s attempt to take his fears seriously. Agreeing with a nod, he made his way down the stone steps to seek out his wife. He had hours of feasting before nightfall and he was eager to begin wooing his wife.