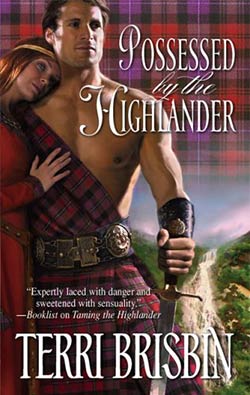 Marian Robertson rescued a child and destroyed her reputation. Now, to keep her family safe, she must marry the stern, dark-eyed warrior negotiating a truce between their clans – and risk her heart to protect the truth.

Manipulated into marrying the ‘Robertson Harlot’, Duncan, peacemaker of the MacLerie clan, finds his new wife’s courage and spirit make it impossible to resist her. But will he put his honor at stake to free her from her past – and claim her love forever?

"A woman with a complicated past and a reputation she doesn’t deserve finds herself involved with a man of courage and honor in Brisbin’s latest richly emotional and splendidly sexy medieval romance."

Marian sat up at the sound. More like an animal bellowing in pain than a man speaking, she drew the blankets up around and over Ciara before climbing from the pallet and going to the door. Checking the bar, she knew the door was secure against most dangers, but what lurked outside this night? Grabbing her cloak from a hook, she wrapped it around her shoulders and peered into the darkness through the small, high window.

The light of the nearly-full moon made much in the area around her cottage visible to her, but she did not need light to recognize his voice when he spoke. The MacLerie’s man.

“Mara!” he called again, leaning over with his hands on his knees.

Sweet Jesus! He would wake not only Ciara but the entire village if continued bellowing like a wounded bear. Deciding to take a chance that she could quiet him better face-to-face, she slid the bar up and set it aside. Lifting the latch, she opened the door a bit so she could speak to him.

“Sir Duncan,” she whispered. “My daughter sleeps within.” Marian stepped out and tugged the door closed behind her. “As does the rest of the village. Can we not speak of what concerns you in the morn?”

He stood up then, rising to his full height that made him tower over her and he strode directly to her. More than anything, she wanted to scamper back in the cottage, close the door, drop the bar and gain any protection that the croft could offer, and she did try. But, he moved too quickly. He blocked the door with his foot, making it impossible for her to close it. His hand slid up the edge of the door, making any thought of keeping him out a hopeless one.

“Please, my daughter. . . ,” she began in a whisper. Glancing at the pallet and seeing no movement there, she stepped forward to block his view into her home.

He stuttered his words and Marian suspected he was in his cups, but that did not make him less dangerous. But, her choice was clear—her safety or her daughter’s—so she released her hold on the door and stepped away. His gaze was hot as it passed over her, from her head to the toes that peeked out from beneath the bottom of her chemise. She tugged her cloak closer around her and walked outside.

Marian could see him out of the corner of her eye and she watched as his hands curled and relaxed, curled and relaxed and then again. He allowed her to walk past him and then he followed where she led—away from where her daughter could see or hear them. She suspected how this would end and she did not want Ciara to witness it. When she reached a small clearing in the trees next to the path, she stopped and turned to face him.

His eyes were wild, but there was a sadness and longing deep inside them that made her heart hurt. Her chest tightened and she found it difficult to take in a breath as she waited for him to do something. When his touch came, the tenderness of it was the true surprise. With only the tip of his finger, he traced the edge of her chin and then her mouth. His hand shook as he did it and her body began to tremble beneath his touch.

“I wanted you there. I wanted to see you,” he whispered, closer now, close enough for her to feel his breath on her face. Then he kissed her neck and the heat of his mouth sent chills through her. Still, she dared not move. “I wanted to taste you.”

He lifted her face to his and leaned down until his lips met hers. It was only a moment before the kiss changed from tender to possessive and she lost the ability to think or to move. Now, heat raced through her and centered itself in that place deep inside. He guided her face to one side and she felt his tongue pressing against her lips. Opening her mouth to him, Marian discovered that her limbs lost the ability to support her and she leaned towards him.

When he’d called out her name and told her to come out, she’d been completely prepared to fight or reason him away. Now though, she was not so certain. He slid his arms around her, touching her stomach, her thighs and then her breasts as he did. Instead of giving her the strength to resist, the caresses excited her making her mouth water in anticipation and making the place between her legs throb in some unrecognizable way.

Was this passion then? Was this what made men lose their minds and what brought clans to war?

That thought did clear her senses and she dragged her mouth from his, drawing in several ragged breaths.

“We must not do this, Sir Duncan,” she said hoping he could still see reason in the muddle of the desire.

“I willna hurt ye, lass,” he whispered, kissing her softly once more. His arms loosened not their hold on her and his hands never stopped their teasing caresses. “Tell me ye dinna want this and I will walk away.” His mouth took hers again in a kiss that filled her with wicked thoughts of the act to come.

Though she doubted his ability to do that, Marian was more shocked in that moment she did not want him to walk away. She wanted to feel the rest of the passion that a man and woman shared, a passion she knew was not meant to be for her. He wanted her now, the proof of his desires stood hard between them and he rubbed it against her belly even as her own body readied itself for him. Her breasts felt heavy and the tips of them tingled and tightened beneath her chemise. He drew back this time and watched her mouth, waiting for the word she would speak. . . the word she wanted to say.