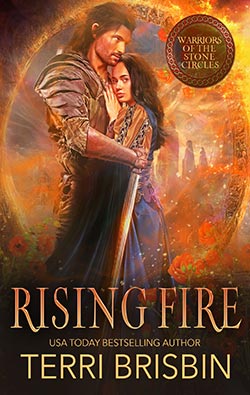 An ancient goddess imprisoned and waiting for release and vengeance. . .
A man sent by the Scottish king seeking the truth. . .
A woman who can control fire. . .

Eons ago, six ancient Celtic gods turned on the seventh who promised to destroy humanity. To keep her imprisoned, they passed their powers down through their descendants who could be called on if, when, the time to rise up came. In the dark times of the late 13th century, that time came.

William de Brus, illegitimate son of King Alexander III, is sent to investigate a nobleman thought to have mysterious powers and designs on Alexander’s kingdom. When he discovers the tales are true, and, that he is part of some larger idea plan, William also finds an enticing young woman who seems to be at the center of it all.

Brienne of Yester knows who her true father is and so do the villagers around her. She knows she is different in other ways and when her powers soar and she can create and control fire, Brienne learns the truth of her father’s nature. And his plan to release their ancestor, the goddess of fire and chaos. The only one who makes her feel safe, the only man she dares trust, may be her soulmate or her destruction.

When passions flare and powers rise, can they trust each other enough to give all of humanity a chance to survive or will the goddess escape to destroy everything in the world?

“Terri Brisbin weaves a richly imagined, spellbinding romantic fantasy in RISING FIRE! Atmospheric, absorbing, infused with dark magic, gripping intrigue and mesmerizing sensuality, A Novel of the STONE CIRCLES series is Terri Brisbin at the top of her game. I'm totally hooked and I can't wait for more!”

“Brisbin begins her romantic fantasy series in style with the release of Rising Fire, the captivating first book in her Stone Circles series. This alternate reality is set in ancient Scotland centuries after the goddess Chaela was imprisoned by her fellow gods for attempting to take over the world. The bloodlines of those gods are about to be tested as Brisbin places their unsuspecting descendants in the line of fire. Brisbin brings a terrific sense of place to this series starter, along with plenty of danger and romance!”

Shielding his eyes from the midday sun, he studied the road ahead of them. Once leaving Dunfermline, their journey proceeded without interruption or delay, first to the south and then to the east where Lord Hugh’s lands and keep lay.

“Have you been this way before, Will?” Gautier asked as he brought his mount to William’s left.

“Nay. I have visited but a few places in these lands and not this one.” In his thoughts he could see three other approaches to de Gifford’s village and keep—none listed in the instructions he’d received.

“You seem familiar with these lands.” The words, Gautier’s tone almost an accusation, hung in the air between them.

He shrugged and shook his head, letting the gesture hang out there in the space between them. Whether good fortune or the fates, a small traveling party appeared on the road behind them, coming through the thick line of forest and onto the more open, exposed fields.

“These people may know more of the route we should take.”

In a few minutes the group of peasants caught up with them. A man, tall and broad-chested and broad-shouldered, older than any of the rest, led them. William’s gaze fell on a young woman standing behind the man, to the side of the cart being pulled by a horse.

“Good day, my lord,” the man said as he stepped, William noticed, between him and the girl. The small group made as to pass them by, but William eased his mount farther onto the path, stopping them.

“Good day,” William said, nodding at the only one who would meet his gaze and not bothering to correct his form of address. “Do you travel to Yester village?” With a touch of his heel to his horse’s side, he made the animal sidestep enough for him to see the girl.

“Aye, we are from the village,” the man replied. With a nod of his head, he added, “’Tis just over the next hill and about a mile on.”

What William could only describe as a shudder passed quickly through the six villagers at the mention of the lord’s name. Only the girl remained unaffected. Damn her that would not raise her eyes to his! But the older man moved as their gazes met once more, preventing William from getting a better look at her.

“Is Lord Hugh in residence?”

With neither of them willing to reveal their intentions or knowledge to the other, this could go on for days. William could also not explain the compulsion burning through him to see the young woman clearly and to speak to her. Was this man her husband then, protecting him from other men? The age difference was no indicator to him. His daughter?

“Sir,” a soft voice began in faltering French. “I fear we know not.”

She stepped from the shadow of the large, older man and glanced up at him. Although braced for something, he was not ready for the reaction of his body or mind as their gazes met. A roar filled his ears and the ground seemed to shake beneath him.

Older than he first thought, her amber eyes resembled molten metal, one that also seemed to surround and outline her form. It could not be, for no one else appeared to notice how truly different she was from the rest of them. Everyone else faded then as though they’d lost all the color in their skin and hair and garments. Then, as if in answer to her heated gaze, the patch of skin on his arm burned more, a searing pain that threatened now to take his breath away.

Blood rushed and the beating of his heart pounded in his ears, both making any words impossible to hear. Without thought, his hand moved to the hilt of his sword as though some danger approached. And, as happened before any battle, his muscles tensed and prepared to give and take blows.

“William.” It took him a few moments to realize that Roger spoke and shook his shoulder because his gaze and his senses were filled with her. “William.”

He was unable to pull his gaze from hers, but he tore himself free of the power of it and nodded, now able to hear his friend’s words.

“They are returning to Yester. We will have to ride on to see if Lord Hugh is there.”

“Brienne?” the man said, touching the woman on her shoulder. “Are you well, lass?” He watched as the young woman, as Brienne, came back to herself and nodded to the man.

“Aye, Father,” she whispered but William heard the words. Whatever had happened, they both felt it. The man tugged the girl back closer to his side and then nodded at William and the others.

“Good day and safe travels to you.”

Without waiting for his approval or permission, the man guided the group back along the road. No one spoke until they were far enough away not to hear their words.

“Merde! I thought you would bed her in the road before all of us,” Herve said with a laugh. “Though she is not the type of woman you usually bed. I’ve never known you to pay heed to woman of that kind.” William did not seek out virgins and he did not seek those in service to their lords who could not gainsay him.

“Her father saw your intention with one look and now he will lock her away until we are gone from this business with Lord Hugh,” Gautier said. “A bit homely for my tastes, but to each,” he nodded at each of them, “his own.”

“Homely? You think her plain-of-face?” he asked. She was radiant and stunning to him, her eyes glowing like a fiery ingot, her womanly curves outlined by the same glow. How could they think her otherwise? The three laughed aloud at his words and nodded. “Truly?”

“Aye,” Herve said. “Though a woman’s beauty or lack of it ne’er stopped me from bedding her if she were willing.”

“Nay, it does not,” Roger agreed. “I have seen you take all manner of women to your bed. Be they young or old, infirmed or in fine mettle, plain-faced or a beauty. You have no refinement in your choices of a bedmate, my friend.”

William let them continue in their boasting and stared off down the road at the travelers who’d reached the hill and soon disappeared over it. And at her.