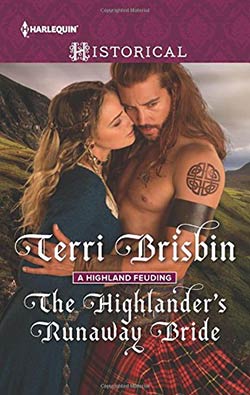 When Eva MacKay learns her father has bartered her off to a warrior from a neighboring clan, she has no choice but to run away, taking her dark secrets with her. Freedom is now within her grasp!

Dutiful highlander Rob Mackintosh tracks down his runaway bride, only to be stunned by the fireworks that erupt between them. For behind Eva’s timid smile lies a headstrong beauty, and Rob knows, no matter what, this marriage is going to be full of surprises!

"4 Stars HOT! -- Brisbin packs a lot of emotion into her straightforward tales, and once again takes readers along on a deliciously bumpy ride, starting with tragedy and ending in triumph with well-drawn characters who must make agonizing choices."

“With this ring, I thee wed,” he said, watching her face as he slid the ring onto her finger. Moving it a bit lower with each phrase, he continued, “With my body, I thee worship, and with all my worldly goods, I thee endow: In the name of the Father, and of the Son, and of the Holy Ghost. Amen.”

As those around them raised their hands to bless themselves and the priest declared them by their words and consent husband and wife, Rob watched as the terror and fear left her face. But instead of whatever emotion he thought to see there, he saw an expression of abject hopelessness in her eyes. She closed her fingers into a fist and looked away, staring into the distance as tears trickled down her cheeks.

Shocked by it, he could not feign joy when the MacKay and his wife approached to offer their felicitations or when Father Darach made some comment about nervous brides. Nor when they went to their seats and cups were raised in their honor. He drank deeply of the cup of rich, red wine and held it to be filled again.

Servants poured out of the kitchens and pantry to carry platters of food to the table. Within minutes, every sort of delicacy and treat sat before him. . . and his new bride. But every bit he put in his mouth tasted like dirt. Eva, he noticed, took little to eat, but also finished her cup of wine.

He remembered little of the rest of the meal or anything said to him. Eva sat motionless at his side, barely replying to wishes offered them and flinching every time their hands touched or their legs brushed against the other’s under the table. Soon, the meal, such as it was, was done and it was time for them to retire. . . together.

Rob remembered telling her that he would not avail himself of that part until they returned to Glenlui and that was his plan. Until he could decipher what was happening here, to them, between them, he would not take her to his bed. So, this night would be one of rest before their journey on the morrow. At ease with his choice, he stood and held out his hand to her. She pushed up from her chair and balanced more on her uninjured foot as he prepared to pick her up.

“We have a special chamber prepared for you,” Lady Morag called out. “For your first night together as man and wife.” She smiled and Rob could almost believe she meant it sincerely. Almost. Right in this moment, he would not trust any of them to be telling the truth, his new wife included.

“A kiss!” someone yelled out from the back of the hall. Iain, he thought.

“A kiss!” someone else called out. And then another and another until the hall echoed with the sound of it. All of them urging, nay ordering him to kiss his new wife.

Eva glanced up at him, clearly she’d not thought that this would happen. He’d be lying if he tried to say he’d not thought about tasting that lush mouth of hers, so he shrugged at her and leaned over.

What trouble could one kiss be between them now that they were man and wife?

At the first touch of his mouth to hers, he discovered the answer was not the one he’d thought it would be.

Eva tried to tell herself it was the wine. Or the pain and exhaustion that yet plagued her. Or the crowd shouting their names. Any of those things could be the reason for the way her heart pounded as his mouth touched hers.

Taller than her, he’d leaned down to meet her as she looked up at him. His lips were firm as they touched hers, but he canted his head and pressed more fully against her mouth. She lost her breath. He took advantage of that moment and slid his tongue over her lips, teasing them to open for him. Eva did, though why she knew not, and everyone and everything else in the hall disappeared when he dipped into her mouth and tasted her.

She wobbled then, fighting the urge to reach up and grab him for support as he relentlessly plundered her mouth with his. As he thrust his tongue deeper, she touched it with hers and he growled, sucking it back into his mouth. Before Eva could reach up, his strong fingers entangled in her hair, pulling, holding her closer to him. He released her for a scant moment, allowing her to draw a ragged breath as he did, and then he kissed her again.

Thoughts scattered. Her body awakened as it had not for months and months, her heated blood rushing and filling places she’d not felt since. . . .