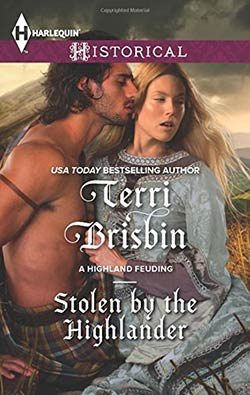 Kidnap in the Highlands!

The morn of her wedding, Arabella Cameron is filled with dread. But if marrying a man she doesn’t love will end the feud between the Cameron and Mackintosh clans, she will do her duty. That is until outlaw Brodie Mackintosh arrives in her bedchamber and steals her away to the mountains!

Brodie knows Arabella has every reason to hate him, but a forbidden kiss soon makes these sworn enemies question everything. And when Arabella’s intended reclaims her, Brodie must fight with all his strength to make her his once more!

“4 stars! Brisbin pens another winner! This is book one in her new miniseries, A Highland Feuding. It’s full of warring highlanders, a centuries-old feud and star-crossed lovers. Readers will be drawn in by the authentic setting, enigmatic characters, dark treachery and chilling suspense.”

Brodie leaned down and tightened the belt under the horse’s belly, making certain it was secure. He stroked the animal, not one of theirs, but a beautiful beast anyway. The Camerons could pick horseflesh and had some of the best in the Highlands. He whispered nonsense as he calmed the horse and finished his task. Or he would have if his friend Robbie had not interrupted him.

“So, she is quite the beauty, is she not?” Robbie said from the other side of the horse. Glancing down at the horse’s rather obvious attributes and frowned at the man.

“Aye, he is,” he said, shaking his head as he checked the other belt and the reins.

“Are you daft or just trying to be difficult, Brodie?” Robbie leaned in closer, his face just above the horse’s back. “The lass. The lass is a beauty.”

“Oh. The lass. Aye,” he mumbled out and saw to his task. He was beginning to think that asking Robbie to accompany them on this ride had been a mistake. He should have asked one of the men on duty instead of his friend.

“Come now, you have to admit that it would not be difficult to marry her? To have her in your bed? To see that hair loose. Those eyes? That mouth?” Robbie said in a low voice and then laughed at him. “I would not mind ending up with her to wife when this bargain is struck.”

“A beauty? Aye, she is beautiful,” Brodie admitted aloud to his friend. Stepping back and giving the horse one more look, he shrugged. “To be honest, Robbie, I’d rather end up with another dozen head of cattle or horses like this one than her. Cattle and horses would be more useful to us, to me, than a woman who lives by her beauty.”

From the frozen expression on his friend’s face and the sudden silence of those closest to them in the yard, Brodie knew she was there behind him. He closed his eyes for a moment and then let out his breath. His words were harsh. Not meant for her to hear. She had heard and he needed to apologize. His uncle would have his ballocks if he did not make this right. Trying to think of the right thing to say, he turned slowly to face her.

If he had delayed only a moment more, he would have missed the fleeting dimming of her eyes and the slight downturn of the corner of her mouth. His stomach clenched at the sight. Then she smiled that empty smile of hers and walked up to him.

“It is kind of you to escort me around your lands,” she said, smiling at him. “I know you have others duties to see to and appreciate your time.”

Not the wrong words. Not the right ones. Simply no words.

“What do you think of him?” she asked, coming alongside of Brodie. “Is he not magnificent?” She was being gracious and giving him a way out of the insult he’d just paid her. He took it.

“Aye, he is. Strong and lively,” he said, slowly sliding his hand over the horse’s withers and nodding. He glanced at the horse’s legs. “Stamina, too, I think.”

“Oh, he can ride for days,” she said, walking to the horse’s head and rubbing it. “He has taken me on many journeys.” She stepped back and met his gaze. He searched for some sign of hurt feelings or insult, but her blues eyes were empty of any emotion. “Should we be on our way?” she asked looking at the gathering clouds over them.

“Mount up,” he called out to the rest of their traveling group, as he assisted her onto her horse.

Once she had settled in the saddle, he handed her the reins and mounted his own horse. She sat as though born in the saddle, completely in control of the huge stallion. He could not help but stare at the way she looped the leather straps over and around her hands, keeping them at the right tension so that the horse had some freedom, but also could feel her commands. Brodie led them out of the yard, through the gates and in the opposite direction and where Caelan had taken her this morn.

Robbie knew where they were going, so he rode ahead and the Cameron guard rode behind them. The lass’ cousin, a young woman named Ailean who wore the frown and had the bearing of an old spinster, positioned herself at Arabella’s side, directly behind him. They’d crossed the stream a mile or so from the keep and continued towards the mountains that ran across their lands, from the loch to the sea. A few minutes after he heard whispering between the two women, Brodie found the lass riding alongside him.

“So, Brodie, where are we going?” she asked in a soft voice, her gaze not leaving the uneven road in front of them.

“You have seen our lands near the loch. We are going to a place up on the mountain for a different look.” It was his favorite place on all their lands, but he did not say that. “A short distance ahead, we’ll take the path up the mountainside.”

She did not drop back to ride with her cousin then. Nay, the lass continued to match his pace and remain there next to him. Which was probably what she had done with Caelan. Unease built in his gut—he’d rather fight a small army of Camerons than have to deal with this one. Worse, she did not even acknowledge the insult paid her—which made it the only thing he could think about as they traveled high up on the path.

After one curve in the road, they entered a clearing, an outcropping that positioned them high above Mackintosh lands. The view was one he liked, one he visited often when he needed solitude. The clouds were low and heavy right now, but when the sun shone and the breezes blew, you could see for miles and miles, across the hills towards the sea and back to the loch.

“Beautiful.” Her breathless voice startled him, for he had forgotten for a moment that she was there.

He dared a glance and found her usually-empty gaze now filled with wonder at the sight before them. Brodie thought, for one daft second, that she might appreciate not only the view but the lands themselves. Lands much larger than those of the Camerons even if you considered the lands they stole all those generations ago. As quickly as it had appeared, her gaze changed at the sound of the others arriving. And the dreaded smile returned.

Brodie turned in his saddle and pointed to the right. “Loch Lochy is about five miles there. Arkaig is north,” he said. “And the sea is about thirty miles to the west.”

“And Mackintosh lands?” she asked, glancing from one horizon to the other.

“To the loch and as far as you can see to the west,” he said, not keeping the pride from his voice. “And miles to the north and south as well.” She stared out at the distances in the directions he’d indicated and nodded.

“You were correct then, sir,” she said softly, meeting his gaze then.

“Correct, Lady Arabella?” He tugged the reins slightly and turned his horse to face hers. A step or two closer and their legs nearly touched. “Correct about what?”

Brodie could not remember a single thing he’d said to her other than the direction of their lands. And he knew he was correct about those. He knew their lands in the light of day or dark of night.

“That additional cattle or horses would be useful to you. Mayhap you should add that to the list of Mackintosh demands in the negotiations before it is too late?”

God save him, but her eyes blazed like icy fire for a moment and then the smile left her face.