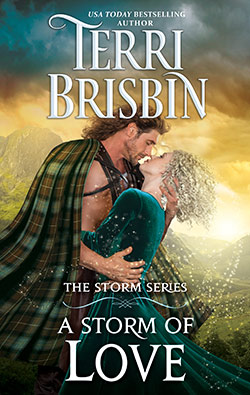 While magic still glimmered over the lands and people of Scotland and the Vikings ruled the western islands and the north, three brothers struggled against their fate to overcome a dreaded curse tied to their own Fae powers. Their hearts, souls and very lives depend on the women they betrayed.

Agneis of Mull betrayed the Fae prince who loved her and lost everything and everyone. Exiled for her sins to the untamed lands of Argyll, a chance encounter with a younger man offer Agneis the possibility of a new life. . . and love.

Breac never expected someone like Agneis to come into his life, but he saves her life even as she saves his soul. Can their love, one based on passion, stand against old enemies who now threaten and a dangerous curse of the Fae?

Breac peered up at the darkening sky and wiped the rain out of his face. For the fifth time in only minutes. The storm swirled throwing winds in his face and dowsing him in waves of rain that soaked through the layers of woolen plaid. His chances and plans of returning to his home in less than three days faded even as the daylight did. Hell!

His luck in finding the healer near Dunadd had been unexpected, for ‘twas rumored that she traveled through the Highlands through the summer months, gathering plants and seedlings for use in her concoctions. He reached down and touched the pouch tied carefully to his belt. Concoctions such as the one he now carried back to heal his sister from the strange, lingering fever that struck her down.

Pushing on through the boggy ground, Breac tried to force his way along the washed-out path, but his steps became slower and slower. The unrelenting rain would, he feared, be his undoing this day. Finally, accepting the futility of making it any farther before night fell completely, he began to search for a dry, or drier, place to seek refuge from this storm. He spied a clearing ahead and made his way there, hoping to be able to see more once he reached it. Just as he approached it, Breac reached up to push a low-hanging branch from his path and stopped, searching for a good place to seek protection from the storm on this higher ground.

A copse of trees with thick and heavily-leafed branches offered him exactly what he needed. Without heavy brush at their base, the canopy they formed above the ground would keep him mostly dry. Creeping in between the trunks, he kicked the pile of damp leaves from beneath him and slid down, using one of the trees at his back as a guide. With his tightly-woven wool cloak wrapped around him, he might keep the worst of the storm away. Some time passed as he dozed in and out of a light, fitful sleep, one filled with dreams, nay nightmares, of his sister’s death.

Breac reached up and rubbed his face, frustration and sadness filling him once more at the thought of his failure. Fenella was his responsibility. He’d sworn to his mother that he would care for her and protect her and instead, he’d failed. Releasing a deep breath, he knew that he was her only hope now and he would not fail her again. When the rain began to ease a bit, he thought about getting a few more miles behind him, but the winds did not relent and without the light of the moon, it would be impossible to see his path until morn.

Leaning his head back against the tree’s trunk behind him, he closed his eyes and sought sleep once more. No more than several minutes could have passed when the sounds of someone approaching grew louder. . . and closer. Others traveling in this same dismal weather? He knew not, but decided to stay in his place and let them pass, if they did, without bringing attention to himself.

Two men, riding horses, broke through the last of the bushes surrounding this clearing and stopped. One of them, the younger one by looks, lifted a large bundle from his lap and dropped it on the ground. The sounds made when it hit the ground told him that it was alive.

An animal of some kind? He slowly pulled himself up to stand, but stayed within the protection of the trees as he watched the younger man climb down from his horse and push the bundle with his foot. It rolled several times as he kicked it across the clearing to the brush at the edge. A cry or grunt echoed with each kick. Breac waited.

“Are ye awake then?” the man asked as he reached down and, using his dagger, slit open the cloak or sack that enshrouded the person within. He gripped both sides and tore it, pulling it free and dumping a bound, naked woman on the wet ground.

A woman? Aye, clearly one, whose feminine curves were not hidden by gown or cloak. Gagged with her hands tied behind her back, she struggled weakly against those bonds.

“Go ahead, Keegan,” the older man called out from his place on top of his horse. “Finish this.”

From the seriousness of the tone used when giving the order, Breac expected the younger man to kill the woman, but the younger one put his dagger back in his boot and held out his hand. The older one tossed a large cudgel to him. Rolling her on her back with his foot, he positioned himself over the woman and lifted the club.

“This time you should heed his warning and not return to the village,” he said swinging the heavy weapon over his head. The woman began to struggle under his foot and he leaned more heavily on her until she stopped. “This time, you will not be able to come back.”

Breac was within an arm’s reach before he even decided to intervene, grabbing the club from the young man and throwing it into the trees. He took hold of this Keegan’s cloak and tossed him aside, away from the woman, where he could watch both of the men.

“You should not interfere in something not of your concern, stranger,” the older man warned. “Her lord has exiled her and she disobeys his orders. He has the right to punish her and we carry out his orders.”

Breac could not think of whose lands were nearby or which lord would order such a thing, but he shook his head.

“Who orders such a thing?” he asked. Glancing over at her was a mistake as he realized in a second for her eyes were wild with terror and her naked body shook in fear and cold. “I see not the brand of a whore on her breast. No fingers or hands are missing befitting a thief. What crime has she committed against her lord to earn this kind of punishment?”

He knew he had no standing, no legal right to stop their actions and he had no doubt they did act on the orders of their lord. But, something in her gaze drew him into this and forced him to step where he most likely should not go. The two drew swords then and faced him, one of foot, one on horse, and he knew he was no match for them. But he stood his ground, keeping them on one side and her on the other. Needing to ease the situation or end up dead like this unknown woman would be, Breac held his hands up to show he was not going to fight them.

“It seems a waste of an able-bodied woman when I need a slave to work my farm,” he said. Nodding at her, he made his offer. “I will take her and make certain she never returns here.” He tugged at his belt and breeches with an obvious gesture, leered at her nakedness and then smiled. “She will not have the strength to go very far when I finish with her.”

The men understood his meaning and so did the woman, for she struggled once more against the ropes binding her legs and hands, managing only to dig herself deeper into the layer of mud at the edge of the clearing where she lay. He could see the doubt in their expressions but he waited, not offering any more words that could sway them or seem overly anxious. He only hoped, for some reason not clear to even him, that the look of disdain for their assignment and exhaustion on the man’s face won out over any qualms of handing her over to him. Finally, the older one nodded.

“Take her then and make certain she is never seen any farther south than the standing stones again.”