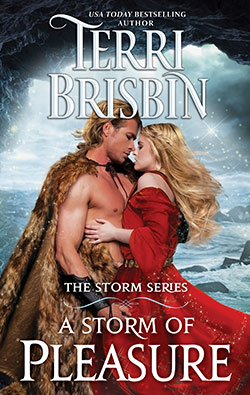 While magic still glimmered over the lands and people of Scotland and the Vikings ruled the western islands and the north, three brothers struggled against their fate to overcome a dreaded curse tied to their own Fae powers. Their hearts, souls and very lives depend on the women they betrayed.

Katla Svensdottir will do anything to save her brother from death—even give herself to the man they call the Truthsayer for his pleasure. For, unless Gavin of Orkney reveals his innocence, her brother will be executed for treason. And sharing this man’s bed will not be a hardship for her, even if she pays a dear price later.

Gavin needs Katla to ease the incessant and maddening noise in his head and he promises her anything to get her to agree to help him—even to help her brother. But, Gavin already knows the boy’s truth and played a part in his arrest and his father’s death.

When kings and powerful men fight over Gavin’s extraordinary gift and when the truth will reveal too many dark and dangerous secrets, will Katla be his salvation or his executioner?

“A STORM OF PLEASURE is a sensuous, lush historical tale with its basis in legends and folklore. The descriptions of real locations in Scotland bring the story to life along with an incredibly sexy hero and the woman who begins by using him but falls in love with him.”

"Brisbin’s latest (A STORM OF PLEASURE) is fast-paced and wildly hot with a touch of the supernatural. Her characters are ideal for the harsh era — strong because only the strong survived. Each has their own reason for doing things, but love grows into the kind of unbreakable bond readers will understand."

Gavin took a deep breath and released it.

Again and again, he repeated it, fighting the vice-like pain that pierced his head. Relentless and worsening, he fought the urge to drink the foul brew brought to him by the latest healer to visit. And all the while, he tried to block out the growing noise around him.

The dark of the moon was not even here and already he recognized that the pain would soon be unbearable. And the damned noises in his head assaulted him in ever-increasing waves with each passing day!

Another breath. In and out. And again.

No relief. Only growing pain and thunderous noise filling his head until he wanted to bash it against the cliff side and end it all. Reaching for the bitter concoction, Gavin decided to give in to the weakness and seek the solace offered in its swirling depths. He tugged the stopper from the bottle and swallowed it mouthful by mouthful until the bottle emptied.

The wizened old man squinted as Gavin finished the brew, saying nothing, only watching as though something terrible was about to happen. The herbal drink rolled roughly in his belly and, for a moment or two, Gavin thought he would vomit it up, but soon it settled.

“And now?” the old man asked, stepping closer and sniffing the air as though there was some sign of change evident by his body’s odor.

Even the softly-spoken words jarred him, adding to the din and to his pain. The never-ceasing pain of these last months.

“Argh,” he cried out, throwing the bottle against the cave wall. “It is not working at all!” Gavin held his head in his hands, pressing against his skull, trying to ease the pain somehow.

“Get out!” he yelled, chasing the old man to the opening of the cave where the sea now lapped against the walls. “Get out!”

Gavin sank to his knees, grimacing and clenching his teeth against the torment as the healer scrambled past him. He could not salvage an ounce of sympathy for the man’s stilted gait or difficulty in avoiding the incoming waves of frigid ocean water. The pain tore away all vestiges of compassion or caring. As his servant tugged the man into the small boat and began to sail him along the narrow passage of water that led to his cave, he collapsed on the cold rock floor and prayed that the drug would work.

Then he felt it. Not a cessation of the pain, but a momentary lapse in the constant skull-shattering noise that vibrated through his head all the time.

Just a moment, but the relief was sheer bliss.

Nothing in his thoughts. Only the sounds of the crashing waves and the river that poured through the opening overhead as it rushed to join with the sea.

But just as quickly as it happened, it was over and the throbbing clamor pulsed back to its original level. Gavin struggled to his feet, pushed the hair out of his eyes and searched for the cause of the interruption.

His servant was gone, taking the healer back to his village further west along the coast. No one else ever remained here with him, not even the women sent by the earl to keep him satisfied as the time for his revelations of truth approached. His only companion was the clatter, relentless, ever-growing, maddening noise and the pain that accompanied it.

Gavin stumbled then, landing on the stone floor. His limbs felt heavy and his eyes weighted closed. Ah, the healer’s concoction did have some effects after all. Rolling to his knees, he crawled towards the drier part of the cave, seeking some place to lie while the drug did its work.

As the drug drew him into some stupor, he felt the silence once more. This time, he could feel it coming from a direction. He laughed harshly at such nonsense. How did silence come from a place? Gavin forced his eyes apart and stared up where the silence seemed strongest.

It was gone as quickly as it had happened.

Closing his eyes, he realized that the sensations rushing through him from this brew were not unpleasant after all. It did not remove the clamor or the pain, but it eased his body in a pleasurable way. He might have to have Haakon bring the healer back after all. Gavin sank deeper into the lethargy until his body began to react as it did as the revelations approached.

Lust filled him, swirling in his veins and in his skin and in his cock until it stood ready. He tried to fall more deeply into the control of the brew, tried to relax and ignore the growing need that heated his blood, but like the relentless noise in his thoughts, it could not be ignored. Since Haakon would be hours until returning and since Haakon was the only person permitted to bring women here to his sanctuary, there would be no way to quench this latest fire in his blood. Well, there was a way but it was never as satisfying as finding release deep inside the tightness of a woman.

Gavin threw his arm over his eyes and breathed in and out, trying to block the lust and need in his blood and the sounds in his head. Just as he reached down to ease himself, he heard it. Not another moment of silence, but the soft sounds of footsteps near him.

From the strength of his need, it should not surprise him that the scent his body gave off had called a local woman to him. It had happened before. From the way things had occurred over this last year, it would happen again. It had happened again. Whatever controlled the power within him to hear the truth and to reveal the truth hidden in the thoughts and hearts of others made certain that the growing need for sex was filled by drawing women to him.

It seemed not to matter if he wanted a woman or if he did not, his body threw out the call and women answered.

Now, in spite of the herbal brew dulling his senses, it had done so again.

Gavin moved his arm away and forced his eyes open to see what his visitor looked like. . . and he lost his breath.

An angel or a Valkyrie, he could not decide, stood hovering above him. Curling locks of long blond hair flowed over her shoulders reaching her hips and eyes of such a dark blue color that they seemed to glow were the first things he noticed about her.

With both the drugs and the lust flowing through his veins enhancing his desire, he watched as the midday sun’s light pouring into the cave outlined her womanly figure. Full breasts pressed against the costly cloth of her tunic and he could not miss the hips and legs that promised him a soft ride. But he found himself lost in the appealing fullness of her lips.

She stood close enough that he could touch her and he struggled to reach out to her. Gavin managed to clasp her ankle and then slid his hand along the well-worn leather of her boot until he touched her skin. The gasp that filled the cave made him smile.

“Valkyrie, am I to die?” he whispered, knowing the true mission of those fabled servants to the old god Odin. Death would be the ultimate release—from the pain and the curse of his powers. “Am I for Valhalla?”