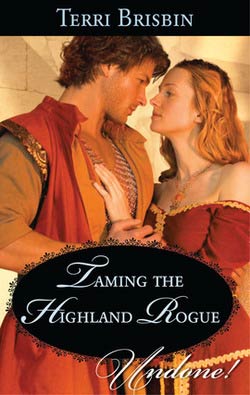 Laird Connor MacLerie is ruthless, a fact his wife, Jocelyn, knows all too well—particularly when it comes to arranging marriages for members of his clan. Though they found happiness and passion themselves, Jocelyn had been bought as a bride for Connor herself and doesn't want to see another woman betrothed without consent. She hatches a matchmaking plot of her own—but it will only succeed if she can tame her Highland husband!

“There is a thief afoot in Lairig Dubh.”

Connor MacLerie, laird of the clan and Earl of Douran, checked his strongbox again. The lock held even when he tugged on it, proving he had secured it, but he knew it had been moved from the smudges in the dust around it. Connor turned to his most trusted men, Duncan, the man who watched over the extensive financial concerns of the Clan MacLerie, and Rurik, who was responsible for the safety of the clan, in war and in peace. Both men reacted as he thought they would.

“Here? Under our noses?” Rurik asked as he stepped closer to peer over Connor’s shoulder at the box that held all the important documents and records of the Clan MacLerie. Rurik was one of few who was tall enough to make Connor feel short. “Nay, no one enters the keep without my approval.”

“Is anything missing?” Duncan asked, crossing his arms over his chest. Always pragmatic, Duncan raised his chin and studied the lock. “I just reviewed several agreements last week.”

“Nay, not that I can tell, Duncan. Once more they have only just ruffled through them and left everything. Intact.” He’d even asked Jocelyn if any keys had gone missing from her ring, but she’d said not.

Duncan shook his head. “That makes no sense at all. Why bother breaking into the box and taking the chance they’ll be caught if they did not want something from it?”

“Or they did not find what they were looking for?” Rurik asked. “How many times has this happened?” Connor motioned for them to follow him back into the main room of his, and Jocelyn’s, chambers before answering them.

“I noticed it first a few months and thought I’d done it. But, four times now it has happened, the last one only days ago.”

“And considering the wedding feast on the morrow that will bring many visitors to the village and keep, that is suspicious timing,” Rurik added, his brow furrowed and his gaze dark.

“Be on guard, Rurik. This chamber is not to be entered by anyone. I will move these. . . .” The door burst open and Jocelyn stood there, eyes wide and out of breath.

Though married now for nearly two decades, she yet took his breath away. Nary a gray hair marred the darker shades of her auburn locks and her green eyes still gleamed with life. Bearing his bairns had softened her body but his readied now even as it did whenever he saw her. Though he feared a day when he did not react so, it had not happened yet and she’d asked if he would be randy into his old age! God willing, aye he would. . . for her.

“Jocelyn?” he asked. She looked startled at finding them there and pasted a smile that did not reach her eyes on her face. “Is aught wrong?”

“Nay, Connor,” she stammered out. “Good day, Duncan. Rurik,” she acknowledged the others with a nod at each. In spite of her words, Connor knew something was amiss. She avoided his gaze, remaining at the door and speaking to the others.

“Your uncle was looking for you earlier. Did he find you?” she asked. She had yet to meet his gaze.

“Nay, but we are on our way to see him now.” Duncan and Rurik understood that their discussion was at an end and strode over to the doorway. As they left the chamber, he watched her enter and look around. “Is there something else?” he asked hopefully, his body urging him onto more pleasurable endeavors.

“Nay, only that,” Jocelyn replied stepping out of the chamber now.

Something was clearly wrong.

His wife had never misunderstood his invitation before and had only declined on a rare occasion. This day, she either missed it or was avoiding it. Connor took her hand before she could leave and entwined their fingers, pulling her towards him. Their mouths touched, his tongue easing between her lips to taste her. After only a moment of hesitation, she fell into it, kissing him back and turning her body as he wrapped his arms around her to bring her close.

Her mouth grew hot, her kisses filled with passion and her body melted to his. His own lust flared, as it always did for her. He slid his hands up, tangling in in her hair and holding her mouth to his as he plundered and possessed it. She tasted of spices and sweets, as though she’d just eaten one of the special treats the cook prepared for the wedding of his foster son and his sister’s daughter on the morrow.

But nothing was more appealing to him than the taste of her skin as he moved his mouth away from her mouth and down onto her neck, kissing and licking his way to that place near her ear that would make her shiver and sigh. The sound of it heated his blood and he reached down to caress her breast.

And he would have gathered its fullness under his palm and rubbed his thumb across her nipple to urge that sound from her once more if it had not been for the. . . .

“Connor!” Rurik called as he climbed the stairs below them.

Caught up in the rush of heat in his blood and love in his heart for her was he, Connor almost allowed their passionate embrace to be witnessed by Rurik. . . and Duncan. . . and Hamish and several other men who all seemed to need his attention now. Jocelyn tugged her gown in place, ran her fingers through her hair and licked her lips, adjusting herself before turning to face this unwelcomed onslaught. The last gesture, the glide of the tip of her tongue across lips swollen from his kisses, made his cock harden even more.

He would kill them all if no good reason brought them to his chambers at this moment! War had best be at the gates to justify this interruption. Before he could take her hand and bid her to remain, Jocelyn slipped away, passing the men as they arrived.