“Whatever I have to give…”

The only person who can help Katla flee a violent marriage is the Viking in her father’s dungeon, the strong and honorable Brandt Sigurdsson. Except Brandt is hungry to see justice done for his family’s destruction, the final vengeance on behalf of all the sons of Sigurd. Is there any persuasion she can offer that will free them both to live—and love—together?

Join the Sons of Sigurd on their quest in:

Stolen by the Viking by Michelle Willingham (March 2020 – order now!)

Falling for Her Viking Captive by Harper St. George (May 2020 – order now!) 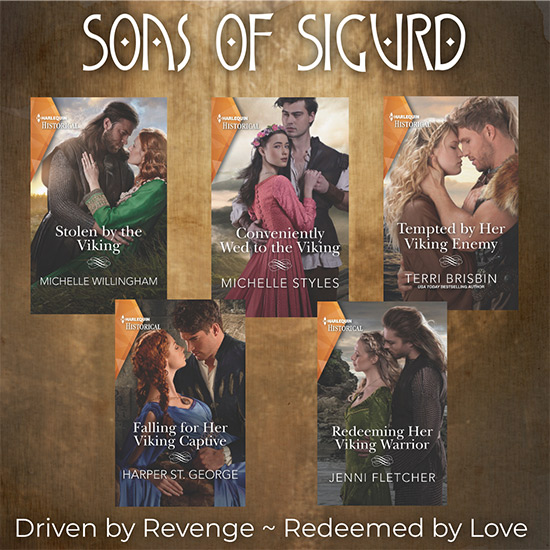 “I would give you my word, my bond, if you would accept it from me. If it would make you more at ease here.” He motioned around the small cell. “I swear that I will not harm you.”

For some reason, she believed his words. She believed them even when she had learned to mistrust promises made by men who wanted something. Or who had power over you. But his words and this promise reassured her. This day seemed to be the day of strange and rebellious thoughts. She nodded.

“You do?” His eyes lit in surprise then. “You do.” He nodded back. “What brings you here this day?”

Katla let out the breath she’d been half-holding in all the way down here. The one she lived holding in as she walked this keep and these lands. Always waiting to learn if this would be the time when her father struck out at her. Always confused over what had turned her father against her. Waiting to learn that her efforts to keep Gemma safe had been for naught.

“’Tis time to remove the last of the bandages.” She picked up her basket from where she’d left it and walked to where he sat.

He watched her movements in silence as she unwrapped the lengthy bandages that encircled his arm. Bringing the lamp closer to inspect the area, she slid her fingers over the places where the arrows had pierced his flesh. Two had hit his arm and both had healed.

“Your markings do not match now,” she remarked, sliding her fingers over the scars that spread across his skin. “The swirls do not meet.” Her fingers traced the pattern on his arm as she spoke.

His skin was smooth and the markings were remarkable in their design. Swirls, pictures made of symbols of the gods, animals and creatures from stories covered his chest and stomach and arms. It must have taken months of painstaking work to create such intricate forms. Only when she realised that his breathing had stilled did she look up and meet his intense gaze.

One moment turned into two and then three as she noticed the flare in his eyes that spoke of one thing. She dropped his arm and busied herself searching her basket for some needed item.

“No matter,” he said. “Once the healing is complete, the scarring will fade into the design.” She’d never seen a man so covered in markings before.

“Will it? Will they?” Katla nodded at the other places that had been injured.

“Aye. It has happened before. The markings were completed some years ago and I have been injured many times since. You do not see most of them, do you?” He sat up and turned his back to her for her inspection. “The worst one is the one that runs from the bottom of my ribs up to my shoulder here.” He shrugged his right shoulder.

Without thinking, she lifted her hand and let her fingers trace the length of the scar once she’d found it. He was right—it disappeared into the patterns if you did not know where to look for it. He stilled beneath her touch then.

Katla wanted to trace the rest of the markings and to feel the powerful muscles that gave them contours and movements. After a moment, she resisted that urge – another rebellious thought – and lifted her hand from his warm skin. She breathed in slowly, trying to calm her racing heart, and let it out.

“Did one person do all of these?” she asked. In spite of her unseemly reaction to touching him after all these weeks of never noticing, her curiosity won out over her restraint.

“A holy man who lived in our village. He saw patterns in everything he looked upon and could paint or mark the images on skin.”

“I have never seen so many on a man from the North.” His brow raised in question. “My ancestors who lived on these lands used such markings, whether placed under the skin as yours are or painted on for battle.”

“You are not Norse?”

“Nay. Well, I am half Norse. You know that my father is, while my mother descended from the local people.”

Her ancestors had lived and controlled all of the lands here until the assimilation with new visitors and conquerors buried their customs and their history. Like the custom of inheriting through their mothers’ bloodlines. Many things had faded into oblivion since the Norsemen moved into this place.

Without thinking, she moved to the next area that needed tending—his leg. It took only a moment to realise the foolhardiness of her actions.

No longer was he a man so weak that he could not rise from his pallet. Nay, he was moving ably and dressed in garments that would need to be removed to examine the healing wounds on his thigh. She could not find her breath at such a thought.

“The wounds look much as these do,” he said in a soft voice. “No redness or swelling.”

Katla swallowed against the tightness in her throat. . . twice before she could speak. “You have checked them?”

“She is not as fair to look upon when she tends my wounds. Or when she forced me to drink those horrible draughts.” He laughed once more and the deep sound of it echoed across the cell.

Katla smiled, trying to find words to say to him. No one here remarked on her appearance. No one dared speak of it, for to do so would force them to acknowledge the times when they could not. The times when the marks of fists or hands had marred her skin. Or worse, when they witnessed her father strike out. No one ever spoke of anything but her abilities and skills. But this man did.

“She taught me much of what I know about healing and herbs. If Alpia said they are healed, I accept her word on it,” she said, neatly avoiding any other parts of what he’d said. Katla stood then and took her basket in hand.

“Will you return?” he asked. He settled on the pallet slowly; the rattling of the chains as he adjusted them was louder than his voice.

“Aye, return here. To this cell. Or are your duties complete?”

“If you have need of me.” She walked to the door before turning back to him. “Ask one of the guards to send for me.”

“I would ask a favour of you before you go, Katla.” His deep voice sent shivers deep inside of her.

“I do not know if I have the power to grant you any favours.”

She wanted to leave yet she waited to hear his request. He’d not asked for anything from her during his weeks in this situation. Oh, he’d begged her to let him die in the first days yet that had changed after he survived the terrible fever with its delusional visions and imagined visitations from his dead kin. . . and wife.

So many possibilities flooded her thoughts then, about all the things he could need or want. So many things that would be denied. So many things unnecessary to a man facing execution soon. Katla held her breath until he spoke.

Driven by revenge, redeemed by love

When Sigurd, King of Maerr on Norway’s west coast, was assassinated and his lands stolen, his five sons, Alarr, Rurik, Sandulf, Danr and Brandt, were forced to flee for their lives.

The brothers swore to avenge their father’s death, and now the time has come to fulfill their oath. They will endure battles, uncover secrets and find unexpected love in their quest to reclaim their lands and restore their family’s honor! 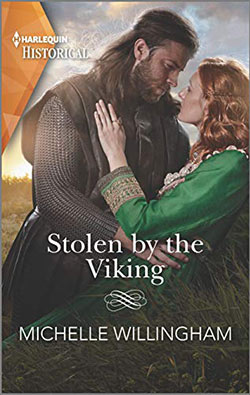 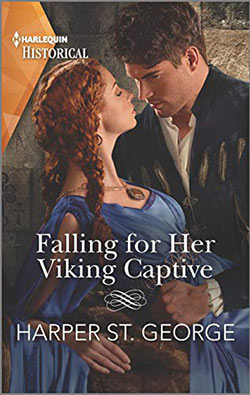 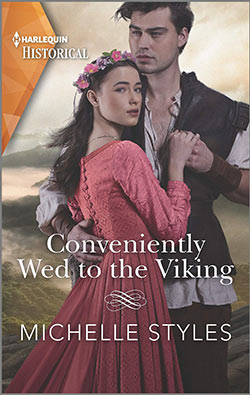 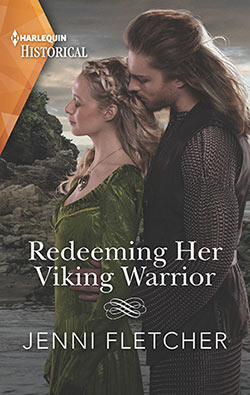