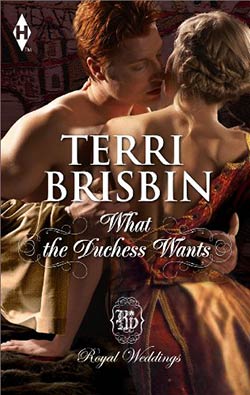 Eleanor, the wealthiest woman in Europe, has just been freed from her marriage to Louis of France and knows she must find a suitable husband quickly. Her wealth attracts many suitors and this time the decision lies in her hands. Who to choose?

Henry of Anjou is hungry—for lands, for titles and especially for the woman who could help in his quest to gain the ultimate position—King of England. Though years separate them, Henry understands that beneath the titles she carries and the wealth and power she controls, Eleanor is a woman. . . a woman who must be wooed to marriage.

They would establish a dynasty that would be among the most famous in history and it would all begin with a simple decision – WHAT THE DUCHESS WANTS!