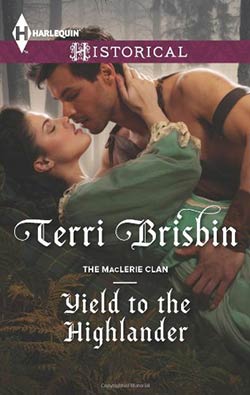 Fearsome warrior Aidan MacLerie may be brave and unquestionably loyal to his family and clan, but his heart remains restless. Until he meets stunning Catriona MacKenzie. She’s a married woman, so he can never truly possess her, yet he seeks her surrender—one kiss at a time….

When the husband from her loveless marriage falls on the battlefield, Cat is left destitute, with her reputation in tatters. Aidan is the only man with the power to protect her now. All Cat has to do is yield to this powerful highlander.

As Catriona was walking towards Muireall’s cottage, a chill trickled down her spine as though she was being watched. Glancing along the path ahead and behind her, she saw no one paying any attention to her. Gathering the sack of mended clothing in her arms, she continued along the way. Only as she passed the last cottage on the lane and turned onto a smaller one did she see him.
Aidan MacLerie.

The earl’s son stood watching her, frank desire in his gaze. He did not approach or speak to her, but he did not look away either. She nodded as she passed him, meeting his gaze for a brief moment and continuing on. The nervousness in her stomach, the tightness in her chest as she tried to breathe and the sweat that trickled down her neck and back all signs to her that she was not unaffected by his attentions.

Cat forced one foot to glide smoothly after the other, torn between trying not to put more meaning into his presence than she should and ignoring the hope that he would speak to her. She’d turned to follow the smaller path, Muireall’s cottage was the third one, when he spoke.

She paused and nodded her head. “And good day to you, my lord.” Daring a glance, Cat found him still watching her from his place. The skin on her wrist where he’d pressed his lips tingled now, reminding her of the inappropriate gesture.

“Aidan,” he said as he took one step and another towards her now. “You must call me Aidan.”

She shook her head and dipped into a shallow curtsy. “I could not do that, my lord. We do not know each other and you are the earl’s son.”

His eyes brightened and a smile lifted the corners of his mouth then. Why did she suspect she’d just issued some sort of challenge to him—one he was pleased to rise and accept? He reached her side and she glanced about to see if any other villagers were about. Seeing none did not ease her sense of nervousness. Cat thought the earl’s son might be even bolder if he knew they were unobserved.

“So,” he said as he lifted her chin to meet her gaze, “are you saying that if we were more familiar with each other, you could use my name with ease?” Then, he did not so much release her chin as he did instead caress the edge of her jaw until his fingers slid away down her neck. “I think we should become more acquainted then.”

His touch ignited all sorts of feelings in her, but she understood they were the wrong ones. His position as the earl’s son and heir gave him much power over people like her—and she knew he had a stream of women eager to share his bed. But it could not be her. It could never be her. She would honor her word, her oath, to her husband. Her debt to Gowan cleared her mind, so she stepped back from him and shook her head.

“I think our acquaintance is what it should be, my lord. I live in your father’s village and know my place. I know I cannot naysay anything you demand, but I beg you to leave me be.”

His gaze moved from her eyes down and she followed the path. During her plea, her hand had taken hold of his wrist. Shocked by the intimacy of such a thing and shocked more that she had touched him, a man other than her husband, Cat released her grip and stumbled back. Waiting those next few moments for his reprimand or retribution, she dared a look at his expression. It was not so much desire now as surprise.

“I beg your pardon, mistress,” he said, stepping off the path and clearing the way for her to walk on. “I meant only to make your acquaintance, having not known you before. I would never demand something that you are unwilling to give.”

Had she misunderstood? Had she just accused him of something he had not done? Her experience with men was very limited and any experience with teasing as this seemed to be was worse than that.

“And I beg your pardon, my lord, if I offended you. My friend is waiting for me,” she held up her sack as proof and could not help it if it felt like protection to keep him from getting so close again. “If I have your leave to attend her?”

“Good day,” she replied, walking faster then. “My lord.” That slipped out before she could stop it and it was met with his deep, masculine laughter.

What devil had made her tease him once more? Cat dared a peek once she’d reached Muireall’s cottage door and found him still watching her. She knocked and entered with a call to the woman inside. Hoping that the needs within the cottage would distract her from the man outside, she walked in.