I know now that I picked the best day to go out on the ferry to Harris/Lewis yesterday/Monday — because today/Tuesday a strong low pressure system came off the north Atlantic bringing gale force winds to much of north and western Scotland. I left Skye during the worst of it and fought to keep the little car on the road all the way to Inverness!

I’m beginning to think it’s me bringing this to Scotland! By the time I crossed the bridge from Skye and approached Eilean Donan Castle (only going past it this time), here’s what the water looked like: 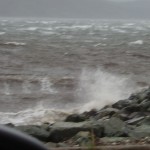 These gales took down trees (right in front of me on A877 — the bus ahead stopped just in time and the guys on the bus managed to get most of the limbs off the road so traffic could pass!), caused a mudslide on A83 near Inverary (where I’d driven just days before!) and made driving even more of a challenge. But I made it to Inverness, passing Urquhart Castle on my way — 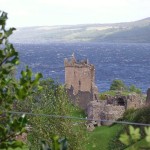 Can you see the whitecaps in the background from the winds? Oh yeah!

But today dawned beautiful and clear and sunny and warm, so back in my car I climbed and headed for the remote NW corner of Scotland. Durness and Smoo Cave were my destinations, traveling out to Ullapool and then north through Scourie and up to Durness. The best part, THE VERY BEST PART, was actually traveling through the area where the heroine of my December book, A STORM OF PASSION, lived and where the book opens. Quinag is a 2300+ feet high mountain on the Assynt peninsula, very dramatic against the sky as I drove past on my way north — Moira would have seen this everyday — 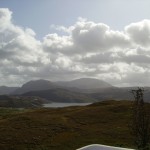 I was heading to Smoo Cave to research a cave location for the second book in the Brava trilogy (A STORM OF PLEASURE, Oct. 2010) and wow was the cave impressive! They actually do boat tours back into the depths of the cave, but because of the high winds and heavy rains yesterday, it was too dangerous today. But I walked inside and got exactly the sensations of sounds and dampness and darkness that I needed to feel for the story…. Here’s a peek: 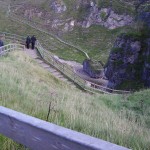 I have to walk down-where?! The path down to Smoo Cave! 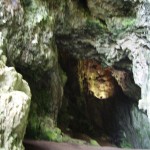 The cave was created by both the sea and by a river — the rushing water of the river enters by a waterfall, crashing into the back of the cave and through it, out to the North Atlantic Ocean. If you climb back up (and make it!) and cross the street you can see ‘blowholes’ in the field that open into the cave — like this one: 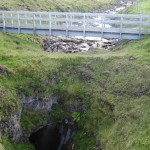 I drove back to Inverness a different way — all along Loch Shin and through Lairgs and the views were very different. The road is lower, following the lochs through the glens and I drove for miles without seeing another car! Here’s one view of  Loch Shin — 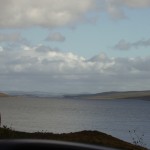 So, whew, I am tired tonight — it’s 10:30pm here and I am getting tired. Tomorrow?  Culloden in the morning and a concert in the evening — Dougie MacLean, whose ‘Caledonia’ is a wonderful tribute to Scotland, is appearing here in Inverness and I got a ticket! I listen to much of his music while writing, so I am excited to be seeing him in person…

Gosh, this trip is turning out to be so much better than I ever hoped — I was getting panicky in the last days before I left about being on my own and driving and all kinds of worries about traveling solo, but  so far, it’s been a wonderful experience…..I’m glad I tried it…!