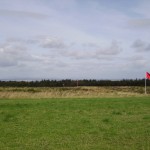 I spent Thursday morning at Culloden battlefields — walking the perimeter and visiting the new center where they even have an ‘immersion’ room.  There, you are placed in the middle of the pitched battle — soldiers from both sides attacking, shooting, fighting, dying…. I found my throat tight and tears burning my eyes as the battle roared around me. Wow….

Once you visit the site, you know that Bonnie Prince Charlie was a fool for ordering a battle in such a place — expecting his exhausted forces to run across a boggy field in heavy rain against a well-rested, well-fed army. IMHO – of course….

After spending a couple of hours there, I ‘hit a wall’ and found that sleep was the thing I needed. Especially since I wanted to be awake for the Dougie MacLean concert that night. Which was. . . .

Fabulous! The show opened with more local young Gaelic performers who were awesome and then Dougie took the stage. He taught us new songs, urged us to sing along, explained his history and his inspirations and entertained us.  And he told us that he’d been a guest of honor when hundreds of pipers played his song CALEDONIA – the anthem of the Homecoming Scotland year…. 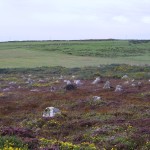 Hill o' Many Stanes near Wick

Friday found me back on the road — this time heading north to take the late ferry over to the Orkneys. Up the A9 along the northeast coast, past castles (Dunrobin), standing stones, cairns, dramatic scenery and twisting turning roads. I wanted to post photos but the ‘loader’ isn’t working now…. darn it!

I stopped in Wick at a Tesco’s and found my book on sale there! POSSESSED BY THE HIGHLANDER — I got a photo of it and with it which I’ll post when this darn thing works…. but it was very cool seeing it out in the world.

Possessed by the Highlander in Wick's Tesco!

I took the 7pm ferry from Scrabster over to Stromness and arrived at the guest house around 9:30…. The sun was setting to our left as we made our way across the Pentland Firth and past the Old Man of Hoy stacks to the harbor.

Yesterday — it rained again! The entire rest of Scotland was sunny and warm but the Orkneys were wet… So I drove all over — visited the Standing Stones of Stenness, the Ring of Brodgar and the best…the Sheila Fleet jewelry workshop in Tankerness and I met Sheila! I love her jewelry and bought my official trip souvenir necklace. It’s gorgeous….I’ll photo it and share it when the ‘loader thing’ begins to work again…. Ogham writing on a round silver disk, with amethyst enamel…

Today I drove down to the southern end of the ‘mainland’, across the Churchill barriers, past Scapa Flow, to visit the Tomb of the Eagles. This is a Bronze-age dwelling and a Stone-age tomb where they found human and sea eagle bones, hence the name.  But, to get to this cliff-hugging site, you walk more than a mile across the hilly farmland to the rocky edge and then…. you crawl down a narrow passageway to the inside of the tomb.  Yes, you read that correctly — crawl down!! 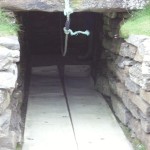 Tomb of the Eagles entrance!

They have a little wooden trolley cart that you can lie on and pull yourself inside along a rope, but I kept steering that into the walls!! So, with the help of some rubber knee cushions and the cheering of some other tourists, I crawled on in.  It was eerie inside — they excavated dozens of human skulls (hundreds of bones), jewelry, tools, and sea eagle bones and talons, hence the name of the tomb.  This tomb was in use for almost 1000 years before the people moved away…and all this happened about 4500 years ago! It was awesome.

So, I’m getting packed because tomorrow is busy — first I’ll spend the day with an archeologist touring all over the place and then I’ll be taking the overnight ferry from Kirkwall to Aberdeen, arriving there at 7:00am on Tuesday!  Even though I’ve done it quite a bit, it is still unnerving to drive my car onto a ship….and to see huge busses and tractor-trailers and trucks doing it too! I just try not to think too much and focus on the scenery…. LOL!

So, I’ll probably post from Aberdeen on Tuesday evening…and hopefully I can post some pictures along with my blog…