I can’t believe I only have one week remaining in Scotland. It feels as though I just landed in the torrential rains in Glasgow and now I’m counting the days until I have to leave…. Waaaaaaa!

So,  where have I been these last few days since posting?

Monday, I spent the day with an Orkney archeologist and it felt sooooo nice to have someone else doing the driving! And I felt like all I did was pick her brain – about history, about archeology, about Scotland, about everything — and it was wonderful. 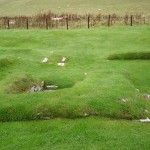 We started out at a couple of the very Viking/Norse sites on the mainland, visiting Orphir and the Earl’s Bu — where it’s believed that Earl Thorfinn the Mighty has his great hall. The one mentioned in the Orkneyingasaga. You know the great history of the Earls of Orkney written down in Iceland in the 1200s? Yes, that Orkneyingasaga. (Break it into 3 words and it’s easier: Orkney-inga-saga.)

Actually, right next to the ruins of the Earl’s Bu and the Round Church, is the Orkneyingasaga Center — and they have a wonderful display of the genealogy of the Earls of Orkney and they’ve used faces we would recognize! I was reading across the chart and wait! That’s Mel Gibson, Nicholas Cage, Bruce Willis, Sean Bean, Robert DeNiro and more! Too funny — but it makes following the Thorfinns, Magnuses, Haralds, Pauls, and Sveins much easier and fun.  The archeologist also told me that the ruins in the photo are probably not the real drinking hall of the earl because they’re WAAAAY too small. They want to excavate the larger field next to it and think the real one is there…. Hey, these Vikings could drink! 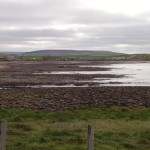 Next, because the tide was out, we walked across the tidal causeway to the Brough of Birsay, the original center of Viking power in Orkney. This causeway fills with water, separating the island from the mainland for half of each day and making planning of tours verrrrrry interesting! Lucky for me Caz both lives in the area and is very careful about that timing.  Gotta say – it’s very strange walking across the sand and stones and then the algae-covered concrete walkway to get to the ruins of the Viking settlement and monastery. But, oh gosh, so worth it! 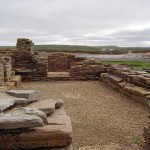 Monastery on Brough of Birsay

This monastery lasted until the Norse decided to make Kirkjuvagr or Kirkwall their new capitol and the then earl moved across to the other side of the Orkney mainland. So, the wonderful round tower planned as an addition to the chapel was never built and the earl and his family moved far away to the other side of the island.  The church on the mainland side of the causeway is the location of St. Magnus’s original burial but his bones were moved to the cathedral named for him in Kirkwall. And because of some special foresight, his bones had been placed inside one of the pillars rather than before the altar (FYI – usually the place for burying saints when one buries a saint) sparing his bones from desecration and destruction during Henry VIII’s dissolution of the monasteries.

We walked back across the causeway (did I tell you it was about 1/4 mile each way?) and our next stop were Standing Stones — first Stenness and then the Ring of Brodgar. 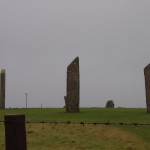 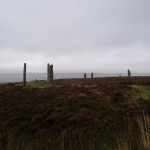 These are two different stone rings — Stenness had about 12 stones originally (along with the famous Odin’s Stone) and Brodgar had about 60, along with its Comet Stone). They are both impressive as you walk around them, the size, the amount of work needed to raise them, and the importance of such sites all strikes you as you pass the stones.

BTW – the Odin’s Stone was known for its curative powers and it was the place to solemnify oaths, such as marriage! People traveled from all over Orkney to pass their newborns through the hole in it to protect them from illness and death. 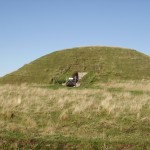 Fresh from my experience at crawling on hands and knees to reach the inside of the Tomb of the Eagles, we next visited Maeshowe (after an unsuccessful attempt on my part to enter Unstan’s Tomb the same way!). Maeshowe is aligned so that the rays of the setting sun on the winter solstice enter and light up the back wall of the burial chamber! Many parts of the walls or roof is made of huge single slabs of cut stone — the worksmanship of it is stunning. BTW — if you’d like to watch the winter solstice event, they set up a webcame from both inside and out to televise it as it happens — www.maeshowe.co.uk — but it only runs for 20 days prior and after December 21. Mark your calendars!)

Oh!! Maeshowe has some of the best graffiti on record – in this case it’s in runes and has been dated to the 12th century, though the tomb has been used by several different populations throughout history. Claims about a woman’s beauty and who slept with whom (several men with a certain beautiful widow apparently) as well as a man boasting that he was the best rune carver in Orkney are included in the clearly-visible carvings on the walls inside the chamber. 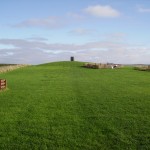 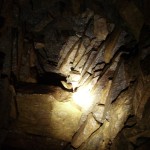 And to finish out the day in a spectacular way, Caz took me to Minehow, another burial mound with a chamber – if you can call it that!!  First we donned hard-hats and she took out her ‘torch’ and unlocked the door leading to the steps. Okay – first, maybe I should mention that I am claustrophobic and can’t ride backwards? The steps – 29 in all – go almost steeply-down, curving around in one direction and then in the other and then end with a 3-foot drop to the bottom of the chamber.  Luckily I just kept following Caz’s instructions or I would have been frozen in place!  There is barely enough room to fit down the steps. . . and I had to keep my eyes on the steps beneath me while holding on to the rock ledge for balance! Oh yeah! Once down at the bottom, after I made myself breathe calmly, the chamber was spectacular! How and why anyone dug this out of the rock, then formed the chamber and the steps (along with 2 side chambers which I could see on the way up) is still unknown but it must have been important to do it.  So I had to do it, too!

BTW — on my first trip to Scotland I bought a beautiful necklace from Sheila Fleet jewelry and it turns out it modeled after a brooch found in a burial mound next to Minehow. This is what it looks like!

And yes, I bought myself a new necklace to mark this trip!!

Okay — the hotel pub is filling with locals and I need to pack up some books to ship home, so I have to stop now. . . but I’ll be back tomorrow….or really late tonight to tell you about the castles. . . .Dunottar, Drum and Crathes.

Oh!! I forgot the best news of all — the sun was out yesterday for a few hours (while I was at Dunottar) and then all day today while I toured Drum and Crathes and got lost (again) looking for a stone ring somewhere nearby . .. THE SUN!!