Ok — I confess — I went to BEA as a booklover and an author and got to sign my April book at the Harlequin booth and my May book at the RWA booth. I even got to meet one of my favorite authors and picked up an ARC of this upcoming book, THE EMPEROR’S TOMB, due out in November. And I got to meet two of my favorite tv personalities from MSNBC (no, not Keith Olbermann, darn!) —   Mika Brzezinski and Joe Scarborough — who were there promoting Mika’s new book. But the highlight of the show….

I met RICK SPRINGFIELD!! Oh yes I did! He was there promoting his upcoming autobiography LATE,LATE AT NIGHT, and he spoke and signed some promo coverflats for attendees… Here’s proof— 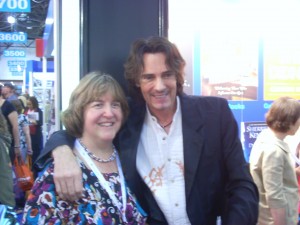 Thanks to Liam R for taking and sending me the photo!

So, that, and attending the Harlequin party (and meeting actress/author Kathy Kinney) and the Kensington party and getting a bunch of books and staying in a hotel called The Pod Hotel and finding an Irish pub named the Pig and the Whistle 2, all added to make my first BEA very memorable!

PS — the honest to gosh best moment happened twice for me — in two different lines, waiting for someone else’s autograph, people recognized MY NAME and had read MY BOOKS! Huzzah for that — nothing better for an author to hear from a reader…..

Going to the BIG City!

I am so excited that I’ll be making my first appearance at the humongous BEA – Book Expo America – tradeshow next week in NYC! I’ll be signing at the Harlequin booth on Wednesday, May 26 and at the RWA booth on Thursday, May 27 – both at 2:00pm.

If you will be attending, PLEASE stop by and say hello…and get a copy of my current Harlequin and Kensington Brava books…

I just found a fabulous iPhone app for the show — with searchable schedules and lists and everything a person needs to prepare and attend the show. Look for the BEAmobile app….and use it!

Maybe it was appropriate that I was in Ann Arbor MI this week and visited the flagship Borders store? I found my brand new release on the shelves and signed the copies while visiting. (I was on a job trip to the University of Michigan Dental School for a few days….). Here’s a photo — 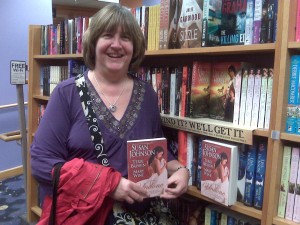 And then, in a nice turn of events, I got the call on my way home from the organizers of RomCon (a romance readers website, forum, convention and contest) that both of my 2009 books – A STORM OF PASSION from Kensington Brava AND THE CONQUEROR’S LADY from Harlequin Historicals — are finalists in the Best Short Historical Romance category of the Reader’s Crown Contest. The convention and the contest is being co-sponsored by Borders so, as I said, a nice twist to things this week!

The winners will be announced at the convention which is being held July 8-10 in Denver CO…. Maybe I’ll see you there? For more info, check out their website – www.romconinc.com