So, I’ll be having 2 books released within weeks of each other and I wanted to share the Harlequin Historical cover with you all — yes, it’s on my FB page but here it is for you all!! 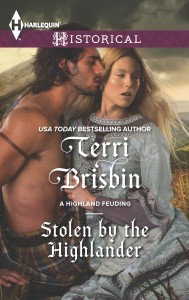 STOLEN comes out in print on March 17th and in digital formats on all retailers on April 1st!!  Woohooo!! A new series we’re calling “A HIGHLAND FEUDING” about a clan war that last more than 300 years! I hope you’ll give it a try! You can pre-order it now….